Writer and music blogger Doug Hamilton was born and raised in America, moved to Canada in the early 2000s, and recently relocated again with his British-born spouse to Portsmouth. This is part eleven of his ongoing series, in this weeks post, Doug explores UK supermarkets Waitrose and Mark & Spencer, describing the battle for culinary decisions that fill up the hearts and stomachs of Brits.

If you’re not a fan of mushy musings on affairs of the heart, I suggest you stop reading now. For the blog post that you are about to peruse positively oozes with sap; it’s fecund with romantic fervor. You see, I am smitten, utterly captivated, moon-in-June besotted. In a word, gaga. All I want to do is loll on a chaise-longue in my dressing gown and pen amorous odes to the object of my affection, but daily I’m driven to get dressed and get out so that I can once again behold my darling’s ample assets. When we’re together, my sweetheart satisfies my every whim and I have truly grown as a person thanks to our union. That’s no metaphor. I’ve literally gained weight by being just a five-minute stroll from all that I desire. It’s the only downside of falling madly in love with a supermarket.

But calling Waitrose, one of Britain’s leading food retail chains, a ‘supermarket’ is like calling a Rolls-Royce a mere automobile; it’s functional shorthand but fails to nail the inherent lavishness of the subject. Thank the gods, there’s a Waitrose branch just down the street from our flat in Portsmouth. It’s difficult to convey to North Americans how different it is from the grocery stores they’re used to—from the ones I frequented before I became an expat. I’ve spent a good chunk of my life shopping contentedly enough in the sprawling likes of Walmart, Costco, Publix, Kroger, and in recent years, Canada’s top chain, Loblaws. (For the record, Britain has its equivalents in Tesco, Sainsbury’s, and Asda, which until very recently was owned by Walmart.) In all those stores, I marvelled at of the boundless displays of soft drinks and toaster pastries and cream cheeses and snack chips, even as I wondered whether we as a society really need 40 different flavours of Doritos. But while the choices were overwhelming, the experience remained impersonal. Even in more upscale chains like Harris Teeter and Whole Foods, I felt dispassionately accommodated but never doted on. 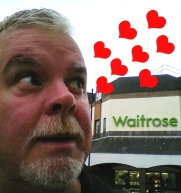 Waitrose is a little like Harris Teeter if it was owned and run by Mary Poppins. It sizes you up kindly but with authority and then sets about bettering your life through magic. Only instead of a bottomless carpet bag, here the wonders are plucked from aisles of chorizo bonbons, Sicilian blood orange sorbet, pomegranate molasses, and pains au chocolat. You want a fresh, restaurant-quality prawn laksa that will give you an authentic taste of Malaysia  but can’t be bothered to make it from scratch? It’s waiting for you in the prepared foods section, along with Japanese ramen, Korean barbecue, Singapore noodles, Indonesian nasi goreng, and many other worldly treats, all ready to eat in a miraculous four minutes. Throughout the store, the food packaging helps you make just the right culinary decisions by describing the contents in elaborately tantalizing terms. The house-brand sliced pancetta is ‘ready to cook until curly and crisp’ and you are urged to ‘wrap up a scallop’ or ‘parcel up the pork.’ (Ahem.) The flat-leaf parsley is ‘a traditional favourite of the French’ and ‘a must [my emphasis] for salads and soups.’ (If you don’t include it, your salad will be crap!) And the organic eggs aren’t just free-range, oh no. They’re ‘from British Blacktail hens who display their inquisitive nature whilst freely foraging in open pastures.’ I wouldn’t be surprised to see the apples labeled ‘from British trees that stretch their leafy limbs lovingly towards the sun whilst simultaneously providing shade for bedraggled orphan children.’

And should you require assistance in finding that ‘majestic’ basil (‘king of the herbs’) or that ‘ruby rose’ harissa paste (‘fragrant with petals, smoky with pepper’), smartly dressed clerks—ties and pressed trousers for the men, tidy smocks for the women—will escort you to the correct location and put the item right in your hand with a smile. No gum-chewing clerks with nose rings and vacant stares limply waving in the general direction of the produce here. The Waitrose experience is so attentive, so refined, some critics have harrumphed that it’s all a bit too la-di-da. A popular Facebook page, Overheard in Waitrose, documents the comically first-world utterances of its patrons. For example:

‘Jemima, you’ll have to take the rosemary off the focaccia before we feed the ducks, darling. They can’t digest it!’

‘Should we get an emergency Stilton?’

‘They don’t even have raw cacao powder. It’s like the backstreets of Russia in here.’

And my own contribution, overheard in our local Waitrose: ‘Mummy, we simply must finish baking the biscuits for Nan’s tea party this afternoon.‘

Television comedians and online wags mock the ‘Essentials’ line of products, which includes such items as mulled spice toilet cleaner. Sure, that’s an amusingly relaxed definition of the word ‘essential,’ but just wait until you host a Christmas party and you desperately want your commode to smell like a punch bowl. Then who’ll be laughing?

Despite the naysayers, who are obviously intent on sucking every bit of joy out of life, I remain committed to my dear Waitrose. But though the heart is true, the eye tends to stray, am I right, fellas? (Sorry, I was attempting a macho jerk thing there for a sec. Can’t pull it off.) Lately a new seducer has arrived on the scene to test my fidelity. For decades, the venerable chain Marks & Spencer, Waitrose’s chief rival in the battle for the hearts and stomachs of posh Brits, operated a small ‘food hall’ in an aging mall in downtown Portsmouth. Its stock was limited but compelling enough—M&S does spectacular desserts or ‘puddings’ as the Brits call them—to merit a visit every month or so. Recently, that branch closed and was replaced by a much larger, spanking-new supermarket across town. It is a thing of beauty, teeming with tempting displays of Indian, Asian, and classic British entrees, and enough puddings to satisfy every sweet tooth within a 10-mile radius. One of my go-to purchases at this foodie Disneyland is the assemble-it-yourself stir fry, which makes a top-notch Asian meal in minutes while also giving me a smug sense of accomplishment for having ‘cooked.’ For the carb base, I choose a container of fresh noodles, from Singapore-slim to Udon-thick, or fried rice with free-range eggs and peas. Then I select the protein—chicken or beef cut into wok-ready strips, prawns, or tofu. I add just the right mix of pre-diced, julienned, and rondelled veggies, sorted into themes such as ‘Aromatic Seaweed Stir Fry’ and ‘Sunshine Vegetables,’ an eye-catching medley that includes pin-curl carrot slices. Finally, I grab one of seven sauces, which range from soy, garlic, and ginger for sophisticated palates like my own to sweet-and-sour for the rubes, all sold in single-use packets. (Excessive use of plastic is a problem, I’ll admit.) At home, I toss it all together and voila! I’m a chef for the night. Okay, maybe just a Boyardee-level chef, but still.

Can this alluringly shiny M&S food hall turn my head forever away from my beloved Waitrose? It may come down to a question of novelty versus proximity. As dazzled as I am by its newness, M&S remains for the time being a cross-town bus journey away. Until we move from our rented flat, Waitrose has the advantage of being the beau next door. But the answer may very well be to have my cake and eat it too. After all, if I keep scarfing down goodies from each supermarket, there’ll be enough of me to go around for both.

Part 4: An American in Pompey: Learning When and When Not to Talk Like a Brit

Part 6: An American in Pompey: British Rain is Legendary

Part 7: An American in Pompey: Hopping Aboard Britain’s Railway System

Part 8: An American in Pompey: British Food from Delicious to Distressing

Part 9: An American in Pompey: Wait, I Have an Accent?

Part 10: An American in Pompey: Who is Freddo and What’s a Krankie?

My Coming Out Story – Part I

In part I of a 3-part series, Susie Edmonds relates her experience of growing up as a young gay woman and the long journey to coming out. The story of coming out is part of [… read more ]

An American in Pompey: The Curious Appeal of British Commercial Radio

Writer and music blogger Doug Hamilton was born and raised in America, moved to Canada in the early 2000s, and recently relocated again with his British-born spouse to Portsmouth. Since he arrived, Doug has been [… read more ]

In response to S&C’s call for Conservative perspectives on the election, Ian Morris explains why he will be voting for the incumbent party despite the strong feelings he has encountered online and off.  Sadly yes [… read more ]