Writer and music blogger Doug Hamilton was born and raised in America, moved to Canada in the early 2000s, and recently relocated again with his British-born spouse to Portsmouth. This is part four of his ongoing series exploring how Doug is ‘learning new tricks in Merry Old England’.

‘You look to be a man of rude health’, a colleague of my spouse told me when we were introduced at a pub one evening recently. From his genial tone, typical of the Brits I’ve met since moving to the U.K., I guessed that he meant I appeared outwardly robust with no discernible signs of pestilence. But the use of the word ‘rude’ threw me. After all, I was born and raised in the Southern U.S., where rude is never a good thing. He must have noticed the puzzled look on my face because he hastily added, ‘Oh, sorry, you don’t say ‘rude health’ in America, do you? You say ‘ruddy health’, I think.’ I replied with a noncommittal shrug. After his compliment, I didn’t have the heart to tell him that few Americans apart from jut-jawed New England matriarchs and Teddy Roosevelt have ever boasted about being in ‘ruddy health’, We’re more partial to ‘fit as a fiddle’, or ‘right as rain’, or perhaps just exclaiming ‘I feel good!’ and then attempting a few spirited but clumsy James Brown dance moves.

But the exchange raised an interesting question. No, I’ve never used the term ‘rude health’ in the past, but should I now as a newly minted British resident? I no longer live in the U.S., so I’m not jawing with Jim-Bob and Betty Lou on a regular basis anymore, I’m engaging in polite discourse with Nigel and Pippa. (Stereotypes employed for emphasis.) In an effort to fit in, should I add ‘rude health’ to my conversational repertoire? 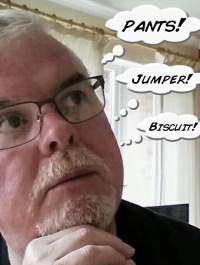 I’m not so sure that I can pull it off. In Post 2 of this blog series, I discussed a few British terms that I’ve definitely been required to adopt or risk being tut-tutted out of the country. I can’t go around insisting on calling pounds ‘dollars’ and pence ‘cents’. Conversely, there are phrases and pronunciations that are strictly off-limits because uttering them in my nondescript American accent would sound terribly wrong and possibly cause an international incident. For instance, I’ll never call a tomato a ‘to-MAH-to’ or ask someone if they ‘fancy a cuppa?’ In between, however, is a vast spectrum of British-isms to parse. For me, ‘rude health’ falls closer to the ‘to-MAH-to’ end.

When I moved from the U.S. to Canada some years ago to begin a life together with my partner, the communication transition was much smoother. Beyond learning what Canadians meant when they said they were ‘going for poutine‘, I basically only had to get used to pronouncing the letter Z as ‘zed’ instead of ‘zee’. But even that took a while to roll easily off my tongue. Brit-speak is a whole other batch of crumpets. The conscientious immigrant must make any number of colloquial judgement calls daily, often when describing the same subject or action. If I’m talking about an automobile, do I say boot or trunk? Bonnet or hood? (Sorry, but hood wins hands down.) Windscreen or windshield? If I’m getting undressed, do I take off my jumper, not my sweater? My trousers, not my pants? My pants, not my underwear? (I think they invented that last one to deliberately confuse us Yanks.)

It’s a tricky thing, deciding how much like the natives I should sound. On the one hand, I do want to connect with them using terms they’re familiar with so that I don’t come off like an unsociable git. (That’s British for jerk). Some expressions I’ve already appropriated with little or no bother, like referring to a parking lot as a car park and a garbage can as a rubbish bin. With minimal discomfort, I can also pop into a sandwich shop and order tuna with mayo on brown bread instead of wheat, with added salad instead of lettuce and tomatoes, and get it to take away rather than to go.  And with only a hint of doubt in my voice, I can ask the supermarket clerk about the orange juice that’s not on sale, but on offer. Admittedly, the path from cookie to biscuit has been a bit bumpier, but I have faith I’ll get there sooner or later.

On the other hand, the last thing I want to happen is that I end up sounding like Madonna during her ‘British phase’. Remember when she married director Guy Ritchie and moved to London and started talking like a character from Shakespeare in Love? Yeah, nobody wants that. I cringed while watching the British version of MasterChef on TV—er, telly—this season. Two North American expats who were competing over-salted their patter with British slang, proclaiming they were ‘chuffed’ (happy), ‘gutted’ (sad/disappointed), etc. They served up these unappetizing exclamations in a American-English fusion accent that was neither here nor there. If she watched, I’m sure Madonna was ‘chuffed to bits’.

Maybe I’m being overly self-conscious, a by-product of moving to a new and startlingly different place well into a life previously festooned with faux pas and wanting, at least once, to make a good impression.  As usual, it’s my partner who has the soundest advice on the matter. ‘Just be yourself’, he says. ‘Talk like you normally would. Nobody expects you to bend over backwards to sound British’. He is a wise man, that partner of mine. Handsome too. And health-wise? Why, he’s really rather rude.

Get Cartographic: For the Love of Maps and the South Coast

Travel writer and planetary modeller David Angus recalls a childhood excursion to the south coast that helped shape a lifelong fascination for maps and their curious symbolism. Holidays. Well, in a way infancy like retirement [… read more ]

I. L. Literate, who in their own words is ‘a soulless, derivate, mercenary hack absolutely in step with the neoliberal cultural climate of soporific pastiche, commodified nostalgia, artistic risk aversion and insipid liberal identity politics [… read more ]

An American in Pompey: Tucking into Britain’s Traditional Sunday Feast

Writer and music blogger Doug Hamilton was born and raised in America, moved to Canada in the early 2000s, and recently relocated again with his British-born spouse to Portsmouth. This is part fifteen of his ongoing series, in [… read more ]