Star & Crescent is an independent news website that believes in journalism to create social change.

How do we do this?

We think good journalism can help shape the world for the better, but we’re starting right here in Portsmouth.

S&C is managed and operated by a small team, who work on a voluntary and freelance basis to run our website, social media and engage with local residents and communities.

What does working on both a freelance and voluntary basis mean?

It means that our team only get paid when we have funding. We have a small number of monthly donors whose donations go towards running the costs of our website.

In addition to this, since we began in 2015, we have been lucky enough to receive funding for specific projects that allow us to pay our team for their work. These include:

To give you an idea of how much we can do with a tiny amount of money, since we began in February 2015, we have run Star & Crescent on an income of approximately £15,000 – £17,000 – over the whole 5 years. Imagine what we could do with at least that same amount every year!

Beyond these projects, our core team also have other jobs and commitments that we fit around S&C.

Even with our small and dedicated core team, there’s no way we could have achieved a fraction of what we’ve done so far. In addition, we work with:

From the beginning, our mission has always been the same: to provide independent and reliable local news and views, written by and for the people of Portsmouth.

You don’t have to be a professional writer for your work to appear on S&C, nor do you have to have been published before. That’s because we love working directly with local residents, organisations and groups on the stories and issues that matter most to you.

We only ask that reporting is fair and balanced, showing all sides of a story, where possible, and that other forms of writing – features, opinion pieces, op-eds, etc – make clear their position and are always accurate.

We reserve the right to edit submissions where necessary, however, we work with contributors during this process, and submissions may be withdrawn at any time.

Who do we work with?

S&C is a member of IMPRESS, the first recognised and truly independent press regulator, which came out of the Leveson Inquiry (before it was abandoned by subsequent governments). Our membership of IMPRESS means that S&C is held to a more rigorous standard than most local newspapers in the UK.

We are also proud to be members of the Independent Community News Network, which exists to support independent, community news publishers like us, and ‘to promote quality journalism, help address the democratic deficit in news poor communities and help create more jobs at the local level’.

S&C has no party political affiliations. We aim to act as a platform for a diverse range of viewpoints across Portsmouth and to this end, we have worked with politicians and councillors from all mainstream political parties, as well as independent candidates.

We work with local individuals and groups who are working to make a change for Portsmouth.

As our editorial policy at the top of the page makes clear, we also prioritise voices and perspectives that are missing from the local mainstream and commercial media. And we do this without influence or funding from advertisers, sponsors, corporate owners, or local institutions.

In December 2017, after two years of running with no legal status as an informal community collective, we founded S&C Community Media, CIC, a not for profit social enterprise.

As we continue to grow, we aim to recruit a community board to help our three Directors expand and develop S&C further.

In addition, we have two other team members:

But the people who make the most difference to us, every day, are the people of Portsmouth.

Want to help us grow even more? Join us, or donate and #ReclaimTheNews! And if you’ve got skills you’d like to share as a volunteer, email us at volunteer@starandcrescent.org.uk. 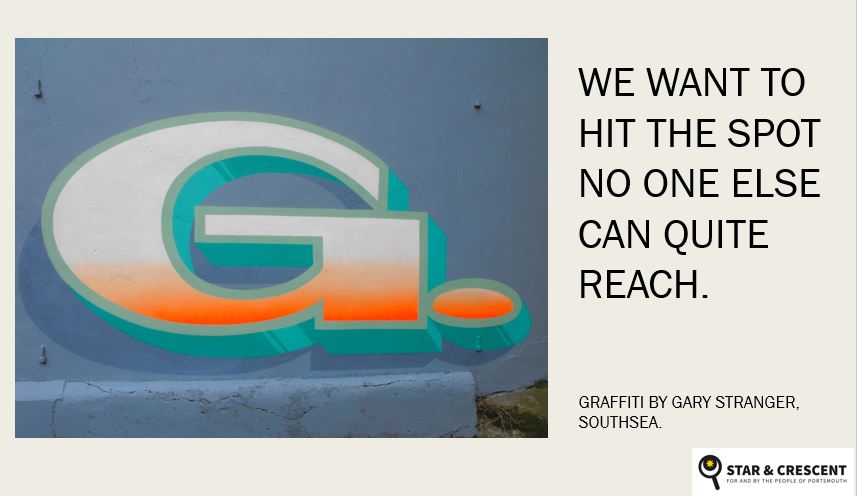