Award-winning Filipino author, journalist and photographer Karl R De Mesa reports further on the Covid lockdown in Metro Manila, a megacity of at least 12 million people. In this latest piece, originally published in Transit Dialogue magazine, Karl examines the economic fallout of the lockdown, the reactions of the city’s various communities and the imperative to resist the ‘depression of stopped momentum’.

We’ve been on pause for far too long in the longest Covid lockdown in the world.

But getting your groove back with resources that simply aren’t there when work and life got stopped on March 15th is like trying to hack a deep and abiding glitch in the Matrix.

This is the season we just can’t seem to move on from and tests your toughness, asking how long can you last in deep waters? I know it’s tested mine as friends in both the communications and martial arts industries lost streams of income.

These guys pivoted to selling and hawking essentials like food and masks and clothes. Others waited too long, relying on their savings and trying to wait out the pandemic, for the economy to open once again, only to do the math by August and execute the hard decision to shutter their enterprise—with a stoic face or in tears it didn’t matter, closed is closed in glitch season.

I am reminded of documentaries about The Greatest Generation. Born from 1910 to 1927, these folks who came of age in the 1929 stock market crash, a great depression that lasted roughly a decade, with a 25 percent unemployment rate there’s nothing like the economy collapsing to drill frugality into the soul.

By September 1939, though, self-sacrifice needed to take centre-stage with the start of World War II. Interesting times, to say the least. How tough did these guys need to be to get past economic breakdown and war?

I didn’t want to be proud and say I could afford to wait it out. I signed up for both our city’s economic rescue packages. I also signed up for the culture department’s similar rescue package for literary writers. Both amounts helped. Both were gone by the end of the first lockdown, which lasted from March 16 May 31.

Why keep your pride in a survival scenario? Death and keeping your pride seem at odds. Alive at the end of it is the only victory. Living with a roof, free of the virus, and three squares is a cut above. We all try to get back our flow and movement, but glitch season is hard to overcome.

Most of these shots were taken when a relaxation on quarantine measures was announced on June 1 until August 4, when Metro Manila was placed back in MECQ lockdown. Some were taken more recently, from August 16 until August 26, after the second lockdown ended.

No Mask, No Rest 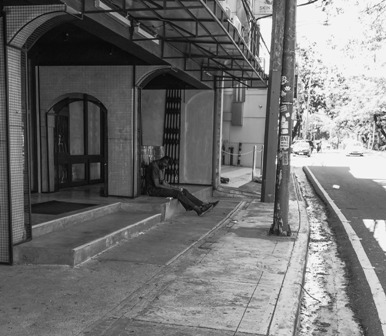 An African expat can’t keep his eyes open anymore and opts to rest in front of one of the closed bars along Kalayaan Avenue.

Zoom in and you’ll notice a pair of feet in the building beside him. That’s a trio of Filipinos who are also resting on torn cardboard and banig [woven mat], likely catching a few winks before they resume their long walk home—necessary because there’s no public transport during ECQ.

There’s been a slight increase in black foreigners from Africa in Makati. Noticed this around 2016, when French-sibilant languages started sounding from below our window, which looks down on one of the most popular bar and restaurant streets in the barangay.

A quick check in the 2010 census said 2,573 people from African countries were already residents, and by 2019 that figure is closer to 3,000 plus. One of the Filipino barbers I usually go to works at a hair service shop owned by a group of South Africans. No surprise they specialize in complex braids.

For months in mid-2019, almost like clockwork, when the bars would close at 4am or 5am, we’d hear raised voices in Afrikaans (or what we thought was what the language sounded like) in familiar tones of argument and threat that needed no translation.

Anyone who knows me knows I love to watch a fight. So when I would be lucid enough to be able to grab my phone and look out my window when I heard these guys I’d wait patiently for these quarrels to escalate into a full blown street fight.

Funniest thing? These incidents never did. They always de-escalated themselves, much to my huge chagrin and disappointment. I was so frustrated sometimes that I’d muster what little I remembered from French class and scream ‘Dégage!‘ or ‘Lutte, cochon!’ to cajole them to fight. They never did. Not once. Someone explain this shit to me?

It’s On The Wall 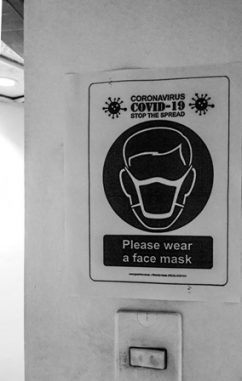 By the time the city got back on second lockdown in MECQ we’d had four confirmed cases of Covid in our building, and the administrators were so frustrated with the violators (mainly old white dudes who wanted to retire here and, as they didn’t give a fig about infection, likely die on Philippine soil, too) that they instituted fees for first to third time breaches of the mask rule. The admin also put up these signs on each wall of each floor. 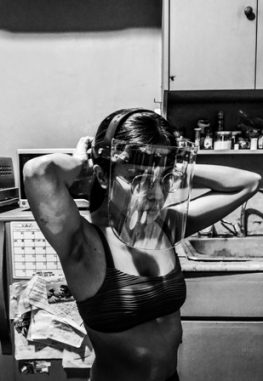 My wife tries on one of the face shields we’d bought. We’d gone out a total of three times in the almost six months of the various transitions and levels of lockdown in the Metro, but the prospect of looser restrictions and GCQ needed to be faced with more stringent personal safety protocols beyond just face masks if we wanted to go further from our city and stay longer in places with more people.

A few days after GCQ was declared, our city mandated the wearing of face shields on the street, too.

A Load of Korean Products 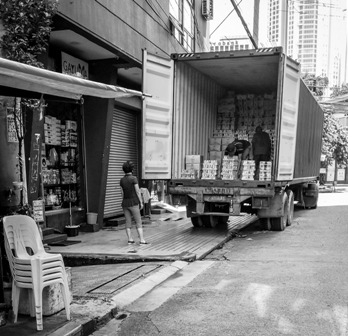 A South Korean national oversees the unloading of a container truck with supplies for their bulk-selling business that range from cosmetics to drinks and food products. This container truck would come twice a week, sometimes arriving at 3am or 4am, and the movers would sleep on the sidewalk until the manager arrived at around 7am to open up the shop. Unloading would usually take anywhere from five to six hours.

So Where Does He Sit? 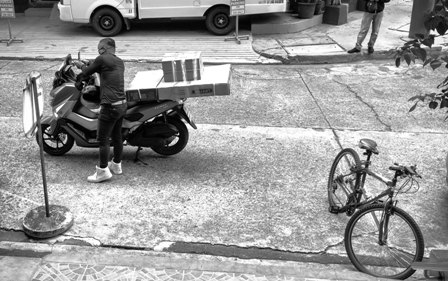 Riders of scooters and underbone motors were the busiest during quarantine and would simply tie or, in this case, tape down whatever they needed to carry on their backseat, whatever the size. This guy is probably not transporting a TV. Or so I hope. 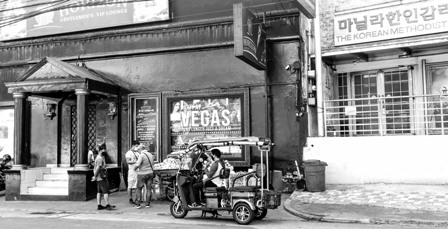 When our usual fruit vendors (three brothers whose names all had an “R” in them) disappeared during the ECQ, we came to know this fruit seller well, who’d positioned his roll-away stall under the sign of the Horizon VIP Lounge, conveniently located beside the Korean Methodist Church on Burgos Extension, in the red light district.

This vendor made a killing, selling a single bunch of bananas at P300+ but we never begrudged him the business since the inflation likely covered the cost of transport from his sources beyond the city borders. It beat going to the neighbourhood wet market, where interacting with people in close proximity was inevitable.

No idea if the dancers of Horizon ever made it back to their strip club. 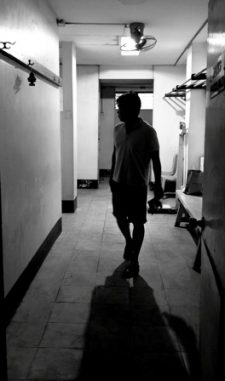 By late June, I had relaxed my paranoia enough to accept an invite by friends to pivot into a new, slightly tangential industry that might bring in extra cash. I went with them to survey and ocular the place where this potential new enterprise might be setup.

Little did I know that the under-reported Covid cases and the clamour by frontliners to ease the burden on facilities would plunge us back into two weeks of another lockdown, putting a halt to this project. At this time though I felt hope rise like an unlikely source of light, as in this shot of a man walking out of cramped, dark corridor.

After two weeks of the return to lockdown, I still haven’t fully exorcised that depression of stopped momentum, flow suddenly dammed up. But I am willing to let this great darkness within me be my own, not something that overtakes me. Glitch season will be overcome if we all keep our lights on and help spark the ones that have gone out.

To Infinity and Beyond

Carolyn Barber of Portsmouth’s Good Mental Health Cooperative, and local researcher and social entrepreneur, shares advice and resources on how to manage your mental health in lockdown. This week, Carolyn uses Toy Story to talk about [… read more ]

‘We Knew of Vulnerable Portsmouth Migrants Without Cash Walking up the M275 to Report to Fareham Police Station’: An Interview with Malcolm Little Pt II