Local parent, researcher and writer, Maddie Wallace, continues her daily diary describing the experience first, of self-isolating, and now of being in lockdown with her children in Southsea. It’s Days 40 – 42, Maddie enjoys a Friday night quiz on Zoom and takes the day off on Saturday, but by Sunday all hell breaks loose. How will she cope?

Friday was a day of housework, phone calls, uni work, laundry, meal planning, home schooling, supermarket shopping and dog walking. By the time it came to making dinner I was shattered and wanted to drop, but I had a hot date with the quiz group on Zoom for some murder mystery action.

My friend, Lesley, (who set up the quiz group, paid for a premium Zoom account and then ordered ‘Murder at the Disco’ for us all to play), dropped me off a pot of veggie chilli in the morning. As there was also some left over roast chicken in the fridge, I decided to be ‘Cool Mum’ and make a plate of chicken nachos and a plate of chilli nachos for a sharing feast.

It was so cool S, Z and A bickered all the way through dinner, a situation made more irritating because I was running late and hadn’t even considered what I was going to wear as Tony Revolta; actor and king of the disco. The character profile Lesley sent said Tony would be dressed in a white three piece suit, black shirt and have a well-oiled quiff, ala Saturday Night Fever.

Listening to them bickering over dinner made me want to burst into tears and shut myself in my bedroom. I almost cancelled my attendance at Murder Mystery Night at 7.45pm, while I was trying to clear up the mess left behind by three kids who were only interested in being right, not in eating their dinner. The meticulously planned sibling sleepover, that I’d organised and promoted for a week, was starting to crumble before A’s temporary bed had even been set up on her brothers’ bedroom floor.

But Lesley had gone to a lot of trouble, and as our unofficial motivation manager, I felt I owed it to her to at least try. And of course, the good thing about meeting people on Zoom is that you can wear whatever the hell you like from the chest down, which is good because I don’t own a white three piece suit or a black shirt.

I chucked a black t shirt on and back combed and pinned my hair into a quiff. Side undercuts are useful for dressing up as a man with a quiff. As I was single-handedly destroying Portsmouth’s air quality ratings with hairspray, it occurred to me that I should probably do some thick 1970s style brows with eyeliner. And while I was doing that, I figured I should also chuck in a goatee and some sideburns.

And lo, I was my brother. Or my cousin. Or S with facial hair. I was Tony Revolta, King of the Disco. The dog was so terrified of me she hid under my desk and wouldn’t make eye contact. 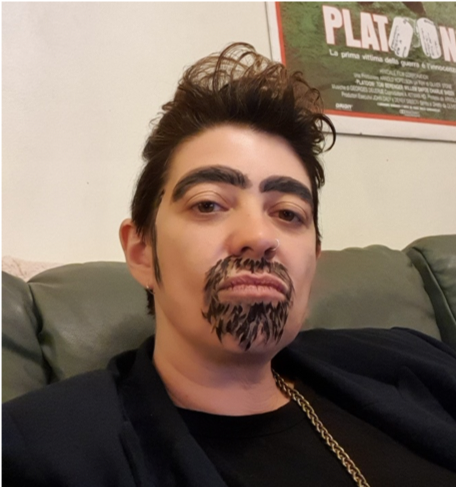 I’m relieved I didn’t bail. Once I got on Zoom, the bickering children stopped vying for my attention and put a film on, and the game was hilarious. Everyone threw themselves into it with crazy outfits, accents and antics. Then someone suggested shots. It seemed like such a great idea because I’d had a glass of wine, so I went and dug out an unopened bottle of Cointreau and joined in. It was one of the best nights I’ve had in ages, and we’ve decided to do it annually – on Zoom for posterity – to commemorate the highlight of lockdown.

Red wine, Cointreau and a cat who wakes you up after five hours sleep is not a recipe for Saturday vitality. Ordinarily, in nice weather like we had on Saturday, we might have gone on a long walk with the dog, maybe had some ice cream, sat on the Common near the Skate Park so S could come out every hour and ask for money for drinks and food, and probably a family movie night in the evening.

In lieu of being able to do the majority of that, I decided to stay in bed reading and watching Netflix. The laundry was up to date, the shopping was done and there was plenty of food, so after I’d given the animals and the five year old their breakfast, I announced that I was having a day off, was going to spend it in bed and would need cups of tea, food and love brought to me throughout the day.

Instead of moaning, as I expected, they loved it. S stepped seamlessly into being in charge. At various intervals I had one or other (or all) of them lying on the bed next to me shooting the breeze and making me giggle. Z spent a long time reflecting on what he’d look like as a female, because he felt that just putting a bit of make up in the wrong places had made me into a completely different character the night before. I said I was happy to put make up and a wig on him if he wants to find out, but he’s yet to take me up on that offer.

Taking a day of annual leave meant I spent Sunday tidying up the mess that had mysteriously accrued in every room of the house. A’s room looked like it had been turned over by the FBI searching for illegal dragons, and in the process had spat random things into every other room of the house. Stuff was everywhere but where it was meant to be, and every time I took one thing back to where it should be, I encountered several more items en route and ended up walking around with armfuls of misplaced toys, shoes, socks, games, art stuff, recycling and rubbish for hours.

Unfortunately, A was unable to help with the clean-up operation as she’d decided to wear socks on her hands. In fact, all she would wear was pants and socks – on her hands and her feet. At one point she appeared with two jumpers on too, but they were quickly left lying around in different rooms of the house, adding to the constant tide of crap I was trying to get on top of. She followed me everywhere, debating all the things you can’t do with socks on your hands.

‘I can’t play the piano now!’ she wailed, throwing herself dramatically to the floor in the living room.

I stepped over her with an armful of soft toys. ‘That’s OK honey, because we don’t have a piano, so no need to worry.’

She was writhing about in existential agony as I left the room. ‘Just take the socks off your hands if you’re worried,’ I said over my shoulder.

And I don’t know how I don’t lose my mind, but there we go.

Image by Hans from Pixabay.

89 Not Out: Day 78, On Visual Impairments and Tech Updates

S&C contributor and Pompey Politics Podcast host Ian Morris shares his experience of the lockdown, as someone with diabetes. It’s Day 78 and Ian isn’t too pleased with Zoom’s update, as he loses the one [… read more ]

Lockdown With My Family in Southsea: Day 67, Negative Self-Talk is Rife

Local parent, researcher and writer, Maddie Wallace, continues her daily diary describing the experience first, of self-isolating, and now of being in lockdown with her children in Southsea. We’re at Day 67, and Maddie has noticed [… read more ]

‘We Are A Lot More Isolated’: Covid and Portsmouth’s Bangladeshi Community