We present an extract from RC Birchley’s Portsmouth-focused walks book Jagged Edges: A Search for Space in an Island City. Here Birchley focuses on walking in late winter, when new signs of life are starting to emerge. This extract is the start of the walk; from her home near Copnor Bridge across to Baffins Pond and was written in late January 2021.

In Portsmouth, snow is still rare, Portsdown Hill’s giant shoulders bearing the weight of any snowfall, the surrounding sea softening winter’s cold, hard edges. But in the last few years, two separate snowdrifts took hold, one bizarrely occurring in April. It has made me think more deeply about what winter means for me. The snow is aesthetically pleasing artificially; it covers dirt and debris, rubbish and landfill with a beautiful white mask. Gale-swept rubble and debris choked by straggling weeds are cloaked by the snow. But tread a foot in and it leaves an imprint. A crude drawing on a blank canvas, the revealing of scribble underneath. The soft grainy texture melting to dirty slush. 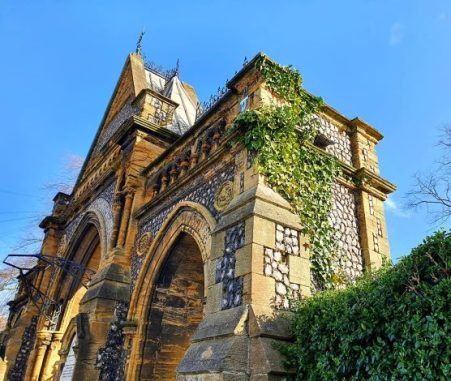 Today is a quest of sorts, to quell this disquiet, to dispel the increasing lethargy I’ve been feeling. I start from my Fratton home, along George Street, to join New Road, bypassing the ivy and privet hedges that border Kingston Cemetery and its ornate archway gates. At the junction, a granite horse-trough stands astride a tiny cobble-strip, somewhat at odds with the closed doors of the Mermaid pub and the row of paint-flecked, overflowing recycling dumpsters. Borne from the Victorian era, it is now a planter, in summer overspilling pink geraniums and sweet alyssums.

I reach Copnor Bridge, my first stop. Across the road, behind the bus shelter, a tiny tract of almost-park, not-quite wild woodland. An enigma, existing in its own domain, a separate entity from that of the upward curve of the busy road in front. I wait to cross, an unbroken line of traffic sweeps past me, gusting wind-chill and engine fumes. This is Copnor Road, a major artery connecting this part of the city with the residential chambers of Copnor and Hilsea to the north, Milton, Eastney and Southsea to the south. Behind the holly-oak and elderberry-lined fence, another transfuser, the railway line vibrates, a voltaic hum as a train hurtles past.

Originally this site was designed to hold a railway station but plans never came to fruition. Instead, it has been as a kind of left-over, limbo space. Too small to be a park or an adventure playground, it is nevertheless a distinctive oddity, an aberration, which I’m drawn to. A giant ash towers over the bus shelter, its branch-fingers clawing at the sky. Beneath it, a land-sunken basin, circling its mossy, twisty roots, moat-like. It is dry but fertile. Even today deep in winter’s grip, greenness endures. An earthy, peaty smell emits as I kneel to look closer. Cabbage-like burdock leaves, sycamore, periwinkle leaves makes me think of a verse, befitting:

‘the leaf that now lies being made

in its shell of scale, the hush of things

unseen inside, the heartbeat of dead wood.

the slow through-flow that feeds

In early spring, the iris-reeds soar, later to reveal sleek, yellow heads, but those of daffodils will emerge much sooner, followed by clusters of tiny, sky-blue forget-me-nots. Moss-cushioned boulder seats – one sculpted into a stone bench, the others smaller, assorted, humps in the ground. In front of this, a strange, rusted iron marker. There is no clue, no hint as to its purpose. It is another quirk here, as though a town planner, undecided over what to do with this small plot of land, simply left it, half-wild, half-finished. But it holds a kind of eccentricity that beguiles me.

A purpose-built bench rests here too, right along the small footpath that curves upwards to reach the bridge itself and over the railway line. This is green too, albeit the chemical enamel green of paint-stripped and chipped wood, flecks of it flake off as I run my fingers over it.

A wrought-iron, black-painted fence separates this patch from the railway line beyond, another oddity –a small brick lodge building, like an abandoned cottage. I wonder if this might have been the intended signalling box. A small SSE notice on the boarded door belies its use – or lack of – the windows sealed too. Splashes of faded graffiti daubed upon the walls. But it is solid, intact, could be welcoming, homely with care. The garlands of browning twine lend it a decaying allure, ivy tendrils loop round, necklaces around the spindly necks of the fence railings in front of the railway track. 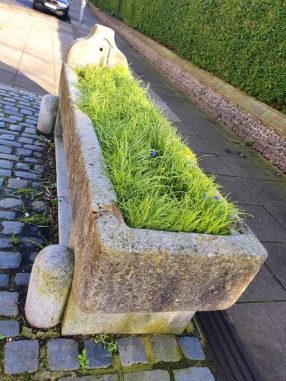 By April, this space will be transformed by crops of bluebells, a vivid, violet carpet, transfixing the eye. As they fade, the colours morph into forget-me-not blues, the ivory sheen of white wild roses. Short of Foxes Forest and parts of the Great Salterns thickets, it might be difficult to find a similar-sized bluebell spread like this in Portsmouth.

I walk on, over the bridge footpath, veering left onto Tangier Road, past the arches and spires of St. Joseph’s Church, the rows of large, well-maintained Victorian and Edwardian terraced houses of Baffins – the unusual name derived from a former farm of the same name. I pass the omnipresent medley of cafes, convenience stores and takeaways which interblend with the older, longstanding community trades: the butcher, florist, tailor. Just past the tiny Alderman Lacey library, the silver-thread outline of Baffins Pond shifts into view. The pond, originally part of the farmland, is a thriving reservoir, a sanctum for birds and water-fowl. Somewhere more rural: on the fringe of a country village or deep in the expanse of a wildlife park.

‘The pale pond stands; ringed round with rushes few

And draped with leaning trees, it seems to wait

But for the coming of the winter night.’ (Philip Larkin,1988)

To my chagrin, it was several years before I was aware of its existence – several more before I first came. Now, living less than a mile away, it’s one of my favourite city places to visit, particularly in May when cygnets bob along behind proud pen and cob, sending a gentle ripple through the pondwater. How each week, with each visit they grow. Necks lengthening, down shedding to smooth white feathers.

Tall oaks and horse-chestnuts encircle the pond and designated wetland areas. Weeping willows overhang, their shaggy heads bowing down to the water below. Reedbeds are dispersed around the pond and in its central bank for nesting and protection. There are seats, and banks to enable closer view and for offering food. Signs warn not to feed bread, recommending grain or special duck and swan food. A diet high in bread for wild-fowl is linked to a condition called angel wing.[i], where its last joint becomes twisted, its feathers protruding outwards, like an aeroplane wing. Incurable in adult birds, it effectively renders them flightless, unable to navigate properly. Distressing enough to see, I can only imagine what it must be like for their lives to be blighted in this way, cut short by this cruel affliction.

Elderly couples rest on the benches scattered around the pond’s circumference. Toddlers shriek as they point towards the squawking flock or the ducks. A shaft of sunlight slants through a cleft in the reed-banks, illuminating their sepia hues with an aureate glow. It dazzles onto the water, flickering, creating an illusion of wave-crests, Despite the number of people milling, chatter mixing with urgent gull-cry, it is somehow a euphonous sound, the mood one of congruity. I am compelled to write, the word-flow a gushing stream. Sitting down, I start scribbling notes, my scrawl almost illegible as I strive to write down my thoughts as quickly as they form in my head. 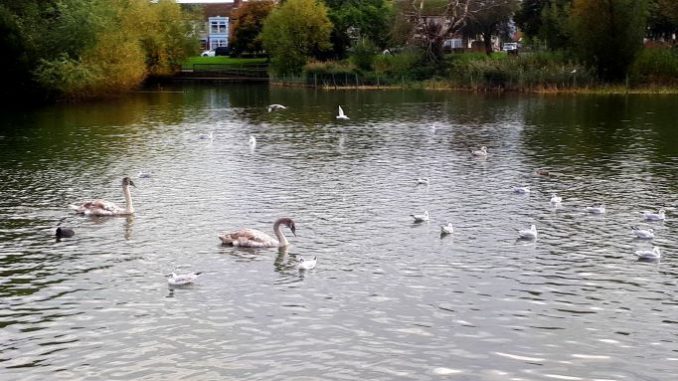 In doing so, I almost miss a shoal of nine tufty, tawny mallard ducklings sailing behind their mother, close to the water’s edge. I’m astounded they’re here so early in the year; it is not yet February. But here they are. Brown, fluffy, furry, alert. Excited, expectant. Without warning, tears start to prick. a bittersweetness balls inside my throat. I hope this is a portent, a promise of life, of hope, after this last year, amid another lockdown. It feels like a gift and at this moment I want nothing more for those little downy fledglings to thrive.

[i] More information about this condition can be found on the Wildfowl and Wetlands Trust website https://www.wwt.org.uk/discover-wetlands/wetland-friendly-living/feeding-bread-to-ducks/#

Portsmouth DarkFest 2018: Something For Everyone’s Dark Side

Vietnam: Journey to the Centre of the Earth Part I

Starring James Mason as Professor Lidenbrock, the 1959 film of the Jules Verne novel Journey to the Centre of the Earth enthralled a young boy named David Angus, who is now a Portsmouth-based travel writer and [… read more ]

By Jane Andreoli Body image is a curious thing, thought Clara as she adjusted her weight in the chair.  She could classify herself an anorexic, because whenever she looked at herself in a mirror, she [… read more ]