S&C Community Reporter Andrew Larder heads down to a recent gig by local band, The Glorias, and speaks to bassist Andy Cornish about their lasting appeal. Photographs by Sally Cornish.

American journalist Lester Bangs described punk rock (via the music of The Clash) as, ‘…lunging after some glimpse of a new and better world.’

Local band The Glorias have been together for five years. Although their music conveys an energy and vitality usually associated with younger bands, the truth is they have over 150 years of experience between them and show no signs of slowing down.

During lockdown last year, the band released a 12-inch single on a variety of coloured vinyl. A collaboration with Sounds of the Suburbs music store, one side featured two tracks from The Glorias, Murder in the First Degree and Here Come The Blues. The other side had two tracks from South London power punks, Plague UK. The record formed part of a series of records released under the banner of Sounds of the Suburbs Sessions aiming to showcase alternative music, each with a sleeve design that would make the John Peel Sessions proud. 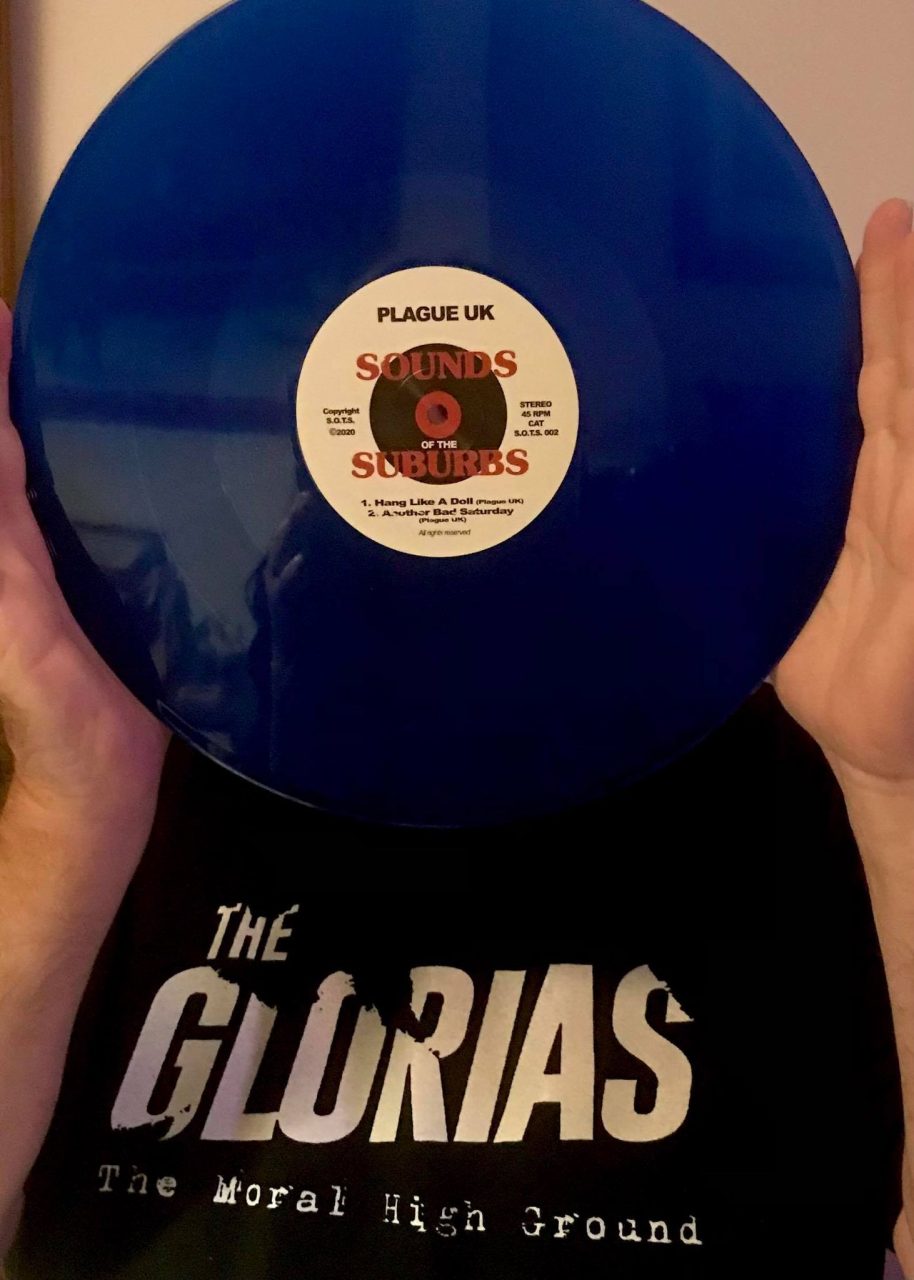 Last month they dropped a new album, The Moral High Ground, which includes the above two tracks, plus the mighty Shake Your Magic Money Tree – a reference to Theresa May’s infamous reply on Question Time in June 2017, that there was ‘no magic money tree‘ when a nurse pointed out she had not had a pay rise for eight years.

But this is just another example of how The Glorias have stuck to their Pompey punk principles for forty odd years, embedding political and social issues of the time in their music. Another can be found in Murder in the First Degree, a track about the asset-stripping of the environment, which contains a guitar riff that would be at home on any  song by The Cramps.

I spoke to their bassist Andy Cornish (Nish, pictured below in a picture by Sally Cornish) who revealed some of their secrets.

Their very first gig was at the Gosport Punk Fest with Jah Wobble in 2016, but they have all been playing for forty odd years each. I asked Nish what the local music scene is like now.

‘We fit into the punk ‘n’ garage genre but there are loads of bands we like, The Stayawakes, Demons, Acid Attack, Horseflies and Fake Empire. There are lots of great promoters working hard to get people out there. For me the Pompey Punk scene is the most supportive.’

He tells me his best gig was ‘at 1865 Club supporting The Skids, great atmosphere, The Skids were incredible. A few months later we played with them at the Wedgewood Rooms. Richard Jobson (Skids lead singer) started singing G.L.O.R.I.A by the band Them.’

Is that where they got their name?

‘Worst gig for me was Amersham Arms Pub in London, I had to play my bass through the PA system as my amp hadn’t turned up. Sounded terrible.’ 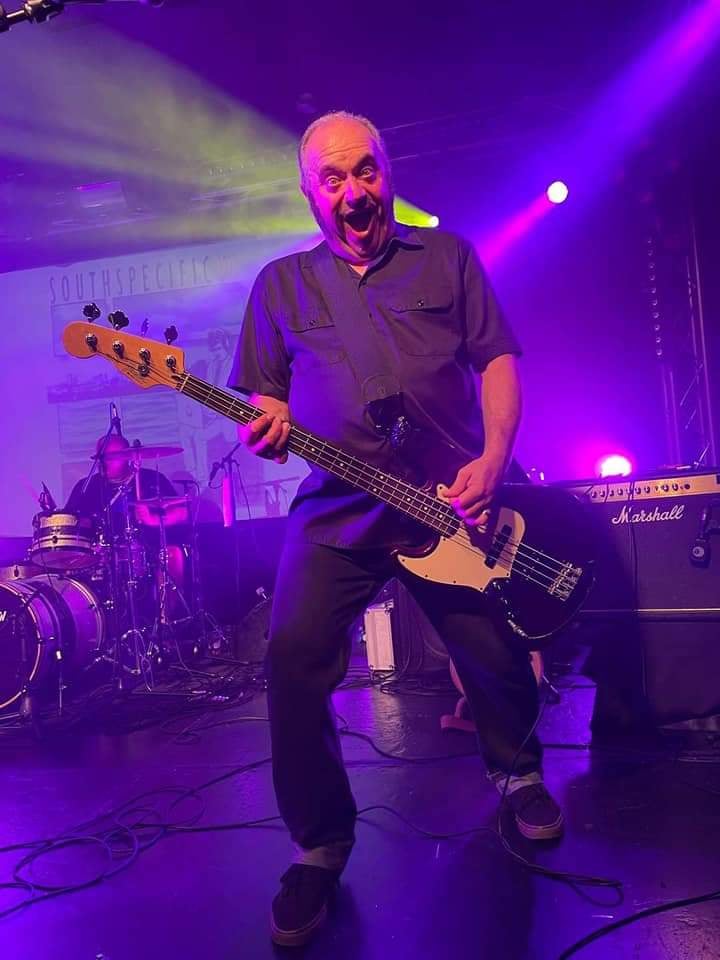 Do you think you might support The Skids again, I ask him.

‘Not sure. You see, I messaged Richard Jobson asking for another support slot.

Nish clearly has a passion for his music that shines through.

So what’s my verdict on The Glorias?

If The Glorias were a movie, they would be Tarentino’s Pulp Fiction, fast-paced, bloody, action-packed and leaving their audience in shock and awe.

If The Glorias were a stand-up comedian, they would be Bill Hicks, disarming you with charm whilst spitting venom in your ear.

If The Glorias were a band – no, wait, they are a band and a damn fine one too. Call the music what you like: punk rock, garage rock, post punk rock – this is foot-stomping rock rock, in my view. Long may The Glorias lunge and try to give us that glimpse of a better world.

You can catch The Gloria’s at the bandstand in Southsea on Sunday 26th September 2021 for free, and supporting The Nightingales at the Wedgewood Rooms on 6th November 2021. Keep up with their news on Facebook. 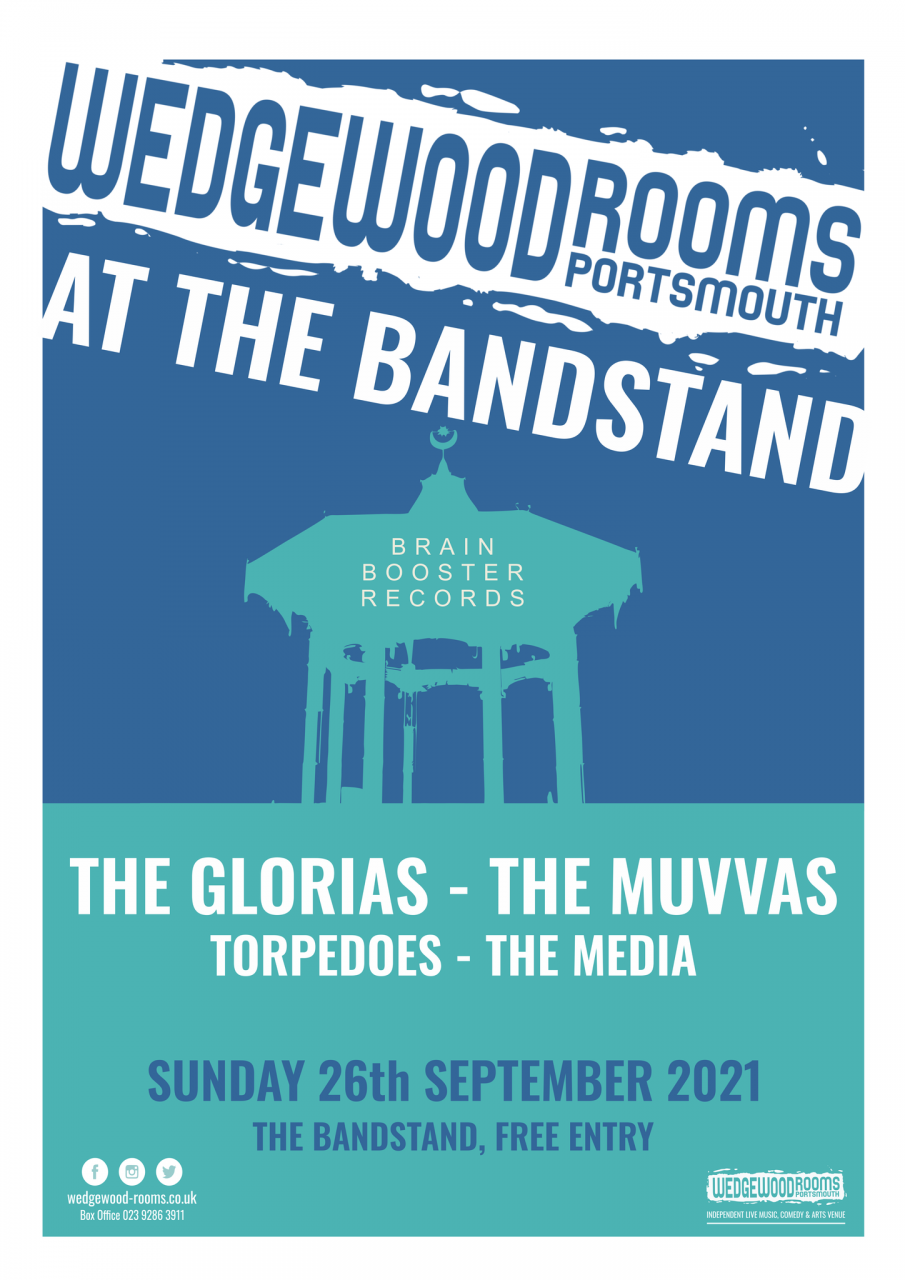 S&C is an independent local news publisher and a not for profit community organisation, managed and operated by a small team who work on a voluntary and freelance basis to run our website, social media and engage with local residents and communities. If you want to know more about us, click here. If you want to find out more about the challenges facing local independent news: visit the #SaveIndependentNews campaign website. Support S&C and donate, and help us spread the word on Facebook and Twitter.

We are currently looking for people to help us move forward our plans as a not for profit, community organisation, particularly in the following:

Get in touch with us at volunteer@starandcrescent.org.uk.

‘Believe in Yourself and Don’t Give Up!’ Two Portsmouth Women Changing Lives

In the second piece of his three part series on the University of Portsmouth’s local technology training project for women, PONToon, Community Reporter Andrew Larder speaks to the team about the project, its progress and [… read more ]

Live Music Garden Party at the Old House at Home

John Callaway continues his love letter in photography to live music, after another recent gig at the Old House At Home pub in Milton. This is a public service announcement, with guitars. Pompey Punk N’Roll [… read more ]

Contributing Editor and reporter Paris Ali-Pilling picks out a top 10 of local organisations and individuals who are crowdfunding during lockdown. Additional reporting by Sarah Cheverton.   Voices from the NHS frontline, Lean on Me [… read more ]