Local parent, researcher and writer, Maddie Wallace, continues her daily diary describing the experience first, of self-isolating, and now of being in lockdown with her children in Southsea. It’s day 23 and Maddie has been trying to perfect the lockdown look, one of the boys has shaved his head, and Maddie is considering doing the same thing. Will she go through with it?

I think everyone is aware of how much time has changed in lockdown, but what about what we wear and how we look?

I haven’t worn make up in weeks. But I keep having the urge to put on a nice outfit to sit and do nothing in. I feel like if I were to put make up on, I’d have to pair it with pyjamas so as not to overkill the lockdown look. Can I be bothered to have a shower is a daily dilemma, one I’m so far winning with myself by trying to remember that basic self-care starts with a shower or a bath. But then what do I wear for another day of ennui? If you rock the pyjama or tracksuit bottoms look then maybe a full face of make up would be a nice addition. It feels like it can only be one or the other. Not both together. Otherwise you’ll be feeling all dressed up with nowhere to go.

S shaved all his hair off and is now sporting a grade 3 buzz cut. My mum had a WhatsApp meltdown about it when we sent her photos, but he loves it. It makes him look older, and along with the rapidly breaking voice, heavier footsteps and muscles appearing everywhere, S is fast looking more like a man than a boy. Z is going in the opposite direction and seeing how long his hair will grow during lockdown; he was so opposed to shaving his head he went to his room to avoid seeing S do it.

I admit I was tempted to join in. I’ve been thinking about shaving my head for about a week. I know a couple of other people feeling the same. I went so far as to look up the psychology behind why people have urges like this in times of crisis. Last week I felt like doing a Britney, does that mean I’m having some sort of break with reality? Would a buzzcut work with that dress?

Are people working from home just doing the top half for video calls and wearing pyjamas on the bottom? Or does getting dressed for work help people get in the mood to be more productive? I could definitely do with being more productive. I’m supposed to be editing an 80,000 word novel and writing a 40,000 word thesis at the moment. I’ve done nothing for almost 4 weeks and I have no idea where to start. Or indeed how to work with a 5 year old jumping all over me.

So instead I tried reading. I took everything out in the garden to sit in the sun and did some free writing and then wrote a poem. I’m a terrible poet, but it felt like that was what I needed to do with what I’d written. I came up with 3 stanzas of weird word association poetry, where each word linked to the next by cliché or idiom. I couldn’t manage to shoe-horn in ‘a bird in the hand’, so I gave up and opened the book on truth I’m trying to plough through at the moment. I managed one paragraph before I had to go back indoors and splay out across the armchair scrolling through Instagram.

Still, it was a start.

And all that time attached to my phone was used wisely in reading up on the pink supermoon and working out when and where would be the best time to see it. I learnt that the sun, earth and moon would be in perfect alignment, and the moon would rise exactly opposite to where the sun was setting, but that it wouldn’t be pink. Moonrise was at 6.55pm, so we took the dog to Milton Common for our daily exercise at that time.

Sometimes a spectacular moment in nature is all that’s needed to remind you that the world will keep on turning, the sun will keep on shining, and the work you need to get done will get done. Eventually. 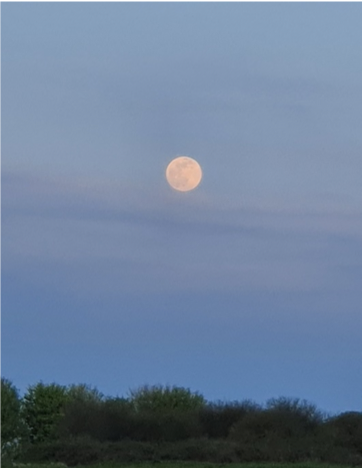 The other day I was listening to some soul music in the kitchen while cooking and Love Train by the O’Jays came on. A appeared and had a dance with me. She said this song should be the virus anthem, because people can still be on love trains in their own houses and all the people of the world could pretend to hold hands. Perhaps instead of clapping for this and that, everyone could just dance on their doorsteps to Love Train. It does appear to be impossible not to move along to it, so A could be on to something.

We went on a Eurocamp holiday last May with my brother and sister in law and their 2 kids. That song was our holiday anthem because it was on the Guardians of the Galaxy soundtrack, and the 3 boys kept singing it. They also hummed the Little Britain theme tune every time A had a meltdown, or the adults started telling the kids to tidy up our cabin, so we technically had 2 anthems. Both songs also seem to work for this situation.

Maybe we could do a national Love Train sing-along on Friday nights?

If people aren’t too busy that is.

Image by TLSPAMG from Pixabay.

Looking up from the base of the tower I see a blue rectangle in the viewing deck one hundred metres above me. The swoop of the sails’ belly is white against the sky. Red lights [… read more ]

‘I Sleep on the Floor’: Refugee Women and Covid-19

IWD 2019: Women’s Victories – Big and Small – Should be Celebrated

Councillor Claire Udy shares why International Women’s Day is important to her, and why we should all celebrate and support women, every day. I have always been politically inclined. From the moment I sat in [… read more ]