Inspired by the many fabulous environmental initiatives taking place in Portsmouth, Pens of the Earth was set up to encourage writers to celebrate existing projects, and to imagine what might be. This week Helen Salsbury digs deeper into the world of tree planting, with thanks to Trish Bell, Dennis David, Pauline Powell and The Tree Council.

The inspiration for the Cornwallis Crescent Community Orchard came from local resident Dennis David, who told me, ‘basically, I love plants.’

The half acre of land on Cornwallis Crescent had been derelict since it was destroyed by a bomb on 24th August, 1940. ‘Unfortunately,’ Dennis told me, ‘over the years people dumped things on there.’ He remembered it as a wild area from his childhood which sometimes had horses on it, and where he could watch butterflies. He thought it ‘would be a massive community asset to utilise that site.’

The site’s location in the middle of a built up area with ‘the precinct literally two minutes away’, and ‘a track going past from the flats, [with] people coming all the way from North End’ made it ‘an ideal place to create something.’

It took Trish and Dennis several years to gather support and funding for this project. Dennis was great at lobbying people and knocking on doors. Trish, who works for the Portsmouth City Council (PCC) as a Resident Engagement Officer, was (and continues to be) an organising force behind the project, and there were a number of other people involved right from the start. ‘Because we’re non-political,’ Dennis told me, ‘we got everyone on board.’

Helen Bergin, PCC Landscape Architect, is one of those who has been involved from early on. Dennis described her as an ‘eco-warrior’, telling how she’d go out with a huge camera and watch a bee closely, and ‘if it needs help she’ll go and nurture it and give it drinks.’

Some of the early funding came from The Co-Op, via Portsmouth Together, and Heartlands. 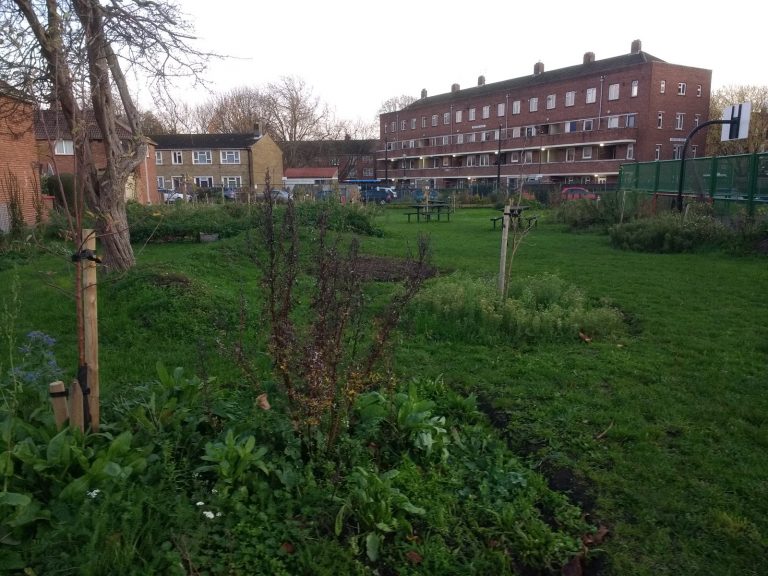 Planting began on 12th March 2016. ‘We planted all sorts,’ Dennis told me. ‘We’ve got about forty different kinds of trees, including apples, pears, plums, pomegranates, greengage, mulberry and cherry.’ There are also raspberries, strawberries, and blackberries. ‘Fruit of every description,’ which is shared with the local community. Children are encouraged to come and pick for themselves, ‘and they love it. [They] get into the strawberries and eat them’. And ‘if Trish has bulbs to plant, they all come over saying, ‘Can we help you plant them?’

‘As far as I know,’ Dennis reflected, ‘[it was] the last bomb site in Portsmouth … and it’s being utilised … which I think is quite an achievement.’

At this time Dennis and Trish weren’t tree wardens. Jon Stokes, Trees and Science Director of the Tree Council, heard of the orchard from Helen Bergin. Trish told me, ‘He came to visit the orchard and was so impressed with what we had done together he made Dennis a tree warden there [and then] and asked him to join the Portsmouth & Southsea Tree Wardens,  part of The National Tree Council.’

However, Jon’s visit wasn’t just to admire what had been achieved. His meeting with Trish and Dennis resulted in an even more ambitious plan. Trish told me, ‘Jon Stokes talked with us and inspired us. […] We thought of links to our heritage in Portsmouth, Charles Dickens’ love of apples and his sea sickness remedy for his travels to America. [We were] inspired to form the Charles Dickens Community Orchards linking Charles Dickens’ birthplace with apples.’

‘Since then we have put in many orchards closely following the Charles Dickens birthplace trail. An orchard is five or more trees and there is a masterplan in place now to put fruit trees throughout the city. It took many meetings to get this into place and out of Dennis’s head onto paper.’

‘The inspirations also included free fruit for local people. Charles Dickens loved to help the local people and it fits in with his ethos. We also wanted to come up with a foraging resource for local people and help folks understand the value of fruit grown on their own trees. This project has so many strands which includes education, training, horticulture, literature, wellbeing and community cohesion through involving the local people in planting and nurturing the trees. Also there is an added benefit to enhancing the local environment through increasing green cover and reducing pollution.’

‘Many organisations are involved with our work now, such as Hampshire & Isle of Wight Wildlife Trust, Food Cycle, Zero Waste Portsmouth, youth organisations, community cohesion groups such as Urbond [and] we have a growing list of volunteers [including] Solent Mind, Roller Wenches, Good Gym, druids and local churches and people. All inclusive,’ Trish said.

‘We did a wassailing event with [The Genesis Order of Druids in] January, this year, and strangely enough all the trees that they blessed have grown exceptionally well.’  Steve Jeal, the Druid’s High Priest, is also a local tree warden.

The Tree Council are a significant supporter of the community orchards. In addition, ‘we have had many supports within Portsmouth including: Community First, PATCH, Portsea Action Group, Rotary Club, Love my Street and Waitrose,’ Trish said.

‘PCC supports the Charles Dickens Community Orchards Trail by kindly granting permissions to plant on different plots of land. [They] also provide advice and guidance in different areas such as events, risk assessments, suitable land and Landscape Architect Services because they understand the positive benefits … to the community. All political parties in the council support the initiative, [and] Councillor Darren Sanders, Cabinet Member for Housing, is [our] dedicated Charles Dickens Community Orchards Champion.’

This recent Sky News video contains footage of the Cornwallis Crescent Community Orchard and its volunteers:

‘Our project has developed into a nationally significant project which will be used as an exemplar throughout the country.’

However, Trish and Dennis never stand still. Future plans include: 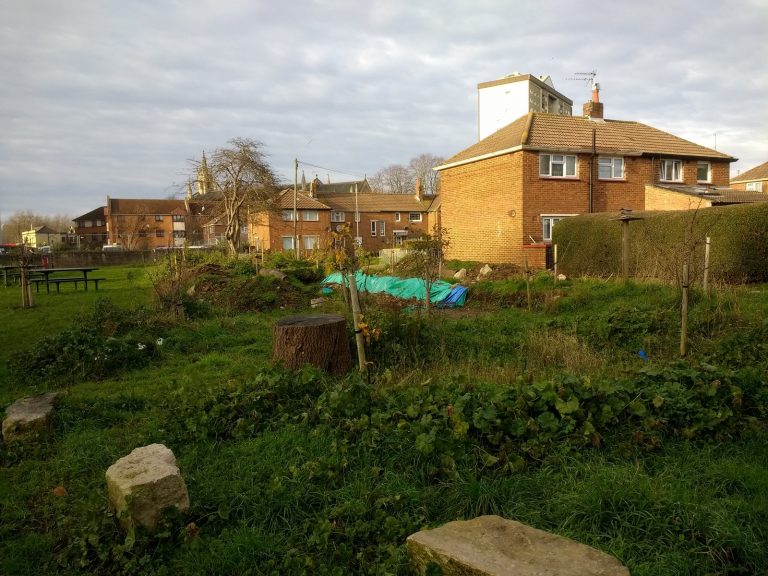 Dennis also talked about diversity and biosecurity. ‘You can’t have one sort of tree now, you’ve got to have a mixture because they could get wiped out.’

This is a vital message for all would-be tree planters. It’s not only essential to diversify, it’s also essential to only buy trees grown in the UK.

At the recent Portsmouth & Southsea tree warden’s AGM, Jon Stokes gave a vital message about biosecurity. The rules are simple:

The Tree Council champions the growing of local trees. Local tree warden groups which are near to woods, such as Havant, hold seed gathering walks each autumn.

What Does the Project Mean to You?

Trish and Dennis’s passion for the community orchards is clear. However, I wanted to know what the project meant to them.

‘It leaves a future legacy,’ Trish told me. ‘It’s not for us, it’s for future generations.’

‘It’s for children,’ Dennis said. ‘It’s to help people. Because people come along and they love sitting down. They come out from the flats, they walk past, they keep the place lovely and tidy, they put the rubbish in the bins, and they really enjoy themselves. Especially in the summertime because you’ve got all the wild plants growing up. You’ve got all the butterflies going through. And you’re back with nature.’

Afterwards, I visited the orchard myself – and it was everything they said it was!

I joined Trish and Dennis, Pauline Powell (co-ordinator of the Portsmouth and Southsea Tree Wardens), Jon Stokes, Sarah Lom and other tree planting volunteers to help support the planting of a D-Day memorial wood in Port Solent, on Saturday 16th November. 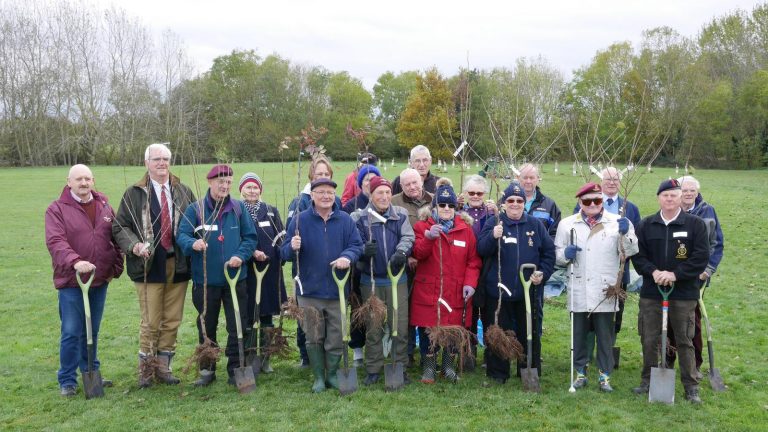 It was a moving occasion, where we teamed up with veterans to help plant seventy five trees. There were a number of speeches, including one from Sarah Lom (The Tree Council’s Chief Executive), and the day was well organised and moving.

We planted a variety of trees (including hazel, hawthorn, cherry, sorbus and willow) in the shape of a wheel – with an elm tree at the centre, and six trees, three on each side of the spoke in a row forming a path to the central tree. This represents the 6th day of the 6 month in a 44 metre circle (6th June 1944).

Jon Stokes demonstrated how to plant, then volunteers paired up with veterans and collected a tree and a spade. My veteran insisted on doing much of the digging – and gave me the tree to carry rather than the spade, because it was lighter! He was charming, and kindly gave me a tissue to wipe my extremely muddy hands when I’d finished hauling the sodden turf back into place around our tree. 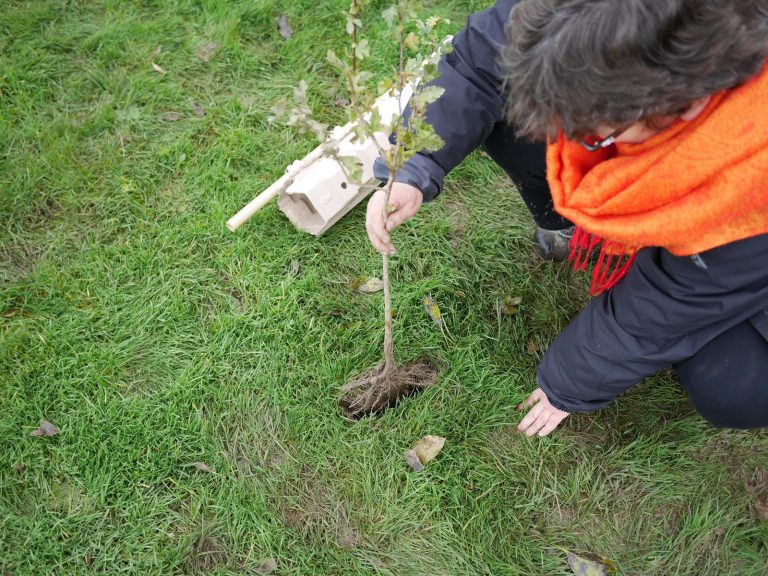 It was an incredible experience: to plant for a collective future, to carry a young tree in my hand, its roots covered in fresh soil, to gently lower it into the waiting hole making sure its roots had space to wander, to firm the soil around it, and to step back and admire it. The sensations I felt were pleasure, hope. I felt I understood better the vision which inspired Trish, Dennis, Pauline and the other volunteers. I wanted to do it again, and have already signed up for more tree planting early next year.

Trish spoke about the significance of the memorial wood: ‘It means different things to all of us. For me particularly, as my mum lost her brother and it affected her greatly. […] I took my grandson and daughter to see what we had done on Saturday morning. It’s a bit muddy there. Someone has put a remembrance cross there now, bless them.’ 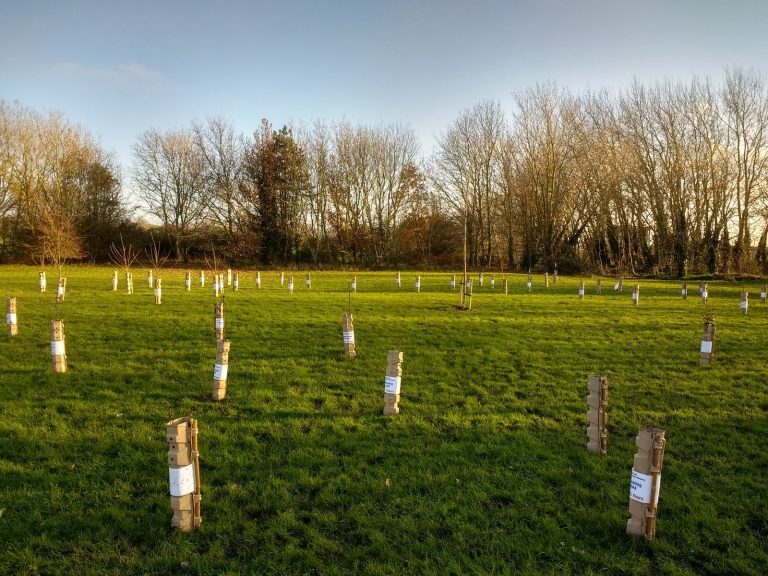 If you want to get involved you can:

Community orchards have now been planted at: 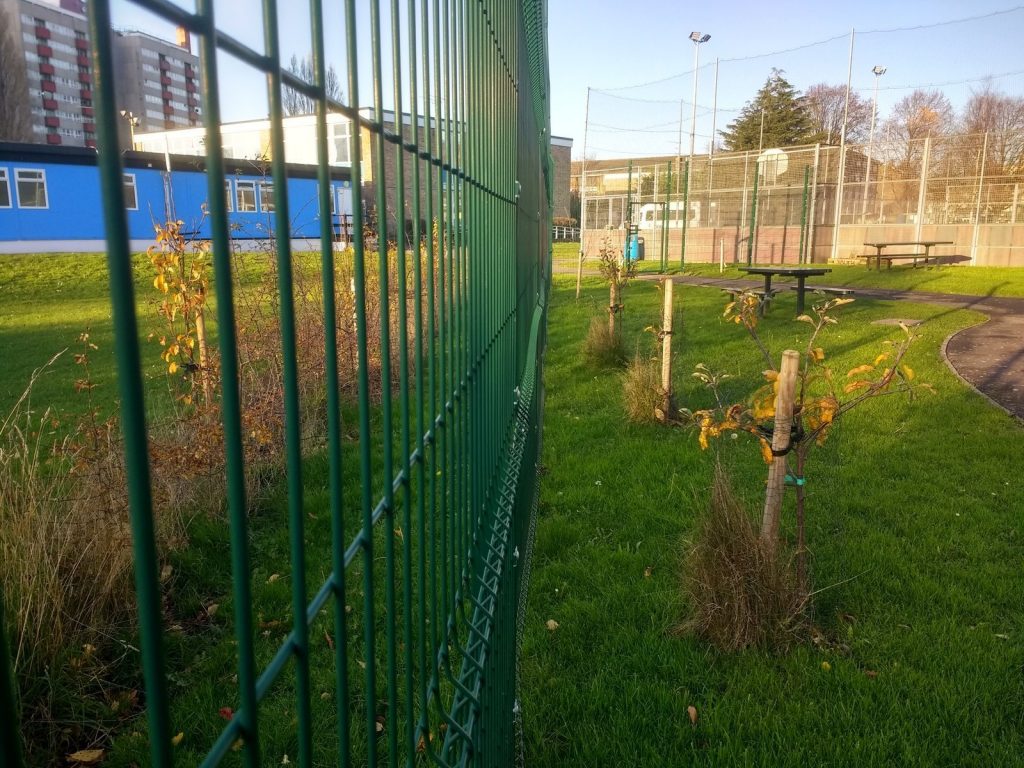 New orchards are going in shortly at:

Pens of the Earth is about environmental tales from a positive Portsmouth – encouraging writers to celebrate existing environmental initiatives, and to imagine what might be. This year, we will also be supporting two charities, one global, one local. Help us to support our global reforestation charity Tree Sisters and plant 2,000 trees by March 2021.

NR30 to PO4: Attending the University of Life

Daniel Malice recalls how his eyes were opened to the world after becoming a student at the University of Portsmouth. Growing up next to the sea in Norfolk, I assumed all coastal towns around England [… read more ]

Pompey’s favourite party political podcast returns with hosts Ian ‘Tiny’ Morris and Simon Sansbury. In this week’s episode, the guys work their way through most of this week’s events. These include the government using mobile data to fight [… read more ]

My Coming Out Story – Part II

In part 2 of a 3-part series, Susie Edmonds moves on from the long years of coming out to live with her girlfriend. Moving to Essex to live with my girlfriend was a really positive step. I [… read more ]