In the first of our new series of stories from our Young People’s Voice project – funded by Victorious Festival and supported by the University of Portsmouth – Suzie Peckett and Mya Matthews of Havant and South Downs College explore their concerns about knife crime in the city.

Knife crime is an ongoing, rising issue for the younger generation in Portsmouth. Data is beginning to show that as the number of young gangs increase, the frequency of knife crime is starting to also. This is an extremely worrying issue that the police force are trying to assess and deal with to help prevent unnecessary deaths in the younger generation, involving knives.

Arrests for having knives or threatening people with blades on school premises went from two to four in our city according to police data, this directly shows that knife crime in the younger generation in Portsmouth is an uprising concern.

A recent story in the Portsmouth News shows that issues surrounding knife crime are being debated between current law enforcers and a retired chief inspector who are providing opposing opinions in regards to the severity of knife crime in Portsmouth.

Current police chief, Rob Mitchell, is certain that there is no need for residents in Portsmouth to be worried about violent knife attacks. The headline of the story reads Hampshire police downplay violent crime fears in Portsmouth as a former chief inspector says : ‘ It’s never been worse’.

Former Lord Mayor Ken Ellcome, who spent 30 years as a police officer in Hampshire before retiring in 1995, said ‘People that are worried in Portsmouth have a point’, showing that he also agrees that there is an issue in the uprising number of knife crimes happening on our streets.

Having this opinion directly from a former member of our police force, who worked for 30 years in our area, provides a valuable piece of information which backs up the idea that knife crime in younger people is becoming more of an issue.

However, the former Lord Mayor of Portsmouth also questioned the police statistics, claiming that figures may not be truly representative of the level of crime in the county. He thinks that the reason there doesn’t appear to be a rise in it is due to the lack of police reports and thorough police investigations.

Current figures in Portsmouth show that knife crime rates are going down. However, this may not be the case because not all crimes are recorded like they used to be as the criteria has changed over the years. This may mean the data is not be showing an accurate representation of knife attacks in Portsmouth.

Chief inspector Mitchell said that officers were working in partnership with communities to try and educate people about knife crime and how to prevent it. This is reassuring to the Portsmouth community because it means that police are aware of the issue and are desperate to raise awareness of it rather than fear.

To summarise, we have found a variety of evidence that suggests knife crime in Portsmouth is worsening, including in younger people. This is an issue which seems to be getting too little attention, even though it is affecting the safety of ourselves and our families.

This topic remains important for our police force, the council and members of our public, who can all help build awareness and inform people on the severity of the issue, in order to see change. By sharing important statistics and information, we can all help to build awareness. Once this information is being spoken about and shared to help educate the public, action can be taken to reduce the risks of knife crime, particularly for the younger generation.

We need to raise a generation of individuals who won’t turn to knives in threatening situations. To reduce the number of individuals carrying or attacking with knives in Portsmouth is the aim. The main goal is to protect the lives of us and our children, to create a safer and prouder Portsmouth. 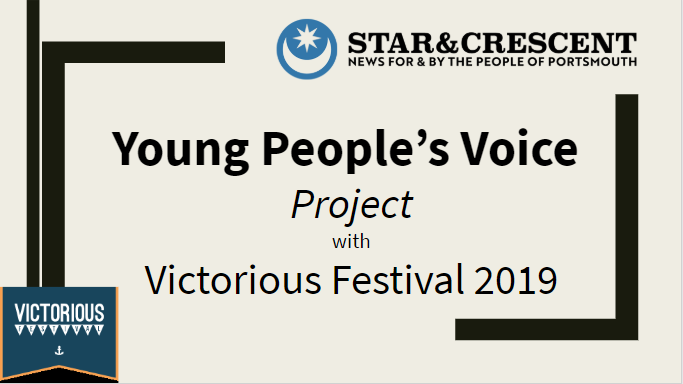 The Young People’s Voices project aims to provide young people with a platform to share their opinions, report on topics that affect them and advance standards of literacy. We worked with students from St Edmunds School and Havant and South Downs College to investigate and write their own stories, in a variety of styles and mediums – from creative memoir and opinion pieces to their own investigations. All their work will be published on S&C throughout July, and all participants have the chance to enter their work into a competition to read their story on the Spoken Word Stage at the 2019 Victorious Festival. You will find all the Young People’s Voices stories here as we publish them.

Portsmouth and the University: Are We Divided by Town and Gown?

University of Portsmouth student Maria Sewell asks whether the growing population of students is having a positive or negative effect on the city’s image.  The Royal Navy has long been at the heart of Portsmouth’s growth and [… read more ]

How to Recycle in Portsmouth: Part 2, Recycling the Unrecyclable

In the second of a three part series running this week, Tamara Groen from the Shades of Green blog gives you all the information you need on recycling items many assume cannot be recycled. Note: [… read more ]