Mark Field has been suspended as a Foreign Office minister after a video was published last week showing the MP physically removing a climate change protester from a dinner function. S&C’s Editor in Chief, Sarah Cheverton, speaks to Shonagh Dillon, Chief Executive of Hampshire charity Aurora New Dawn, about the incident and why it concerns activists fighting violence against women.

What did you think when you first saw the story about Mark Field MP and a Greenpeace protester?

As with most incidents like this, I find out about them on Twitter when I log in at some point in the morning, between smashing the patriarchy and making the school lunches. My timeline tends to be filled with beautiful, radical feminist women who endlessly raise the profile of male violence against women.

The first tweet I saw was from the indomitable Karen Ingala Smith: 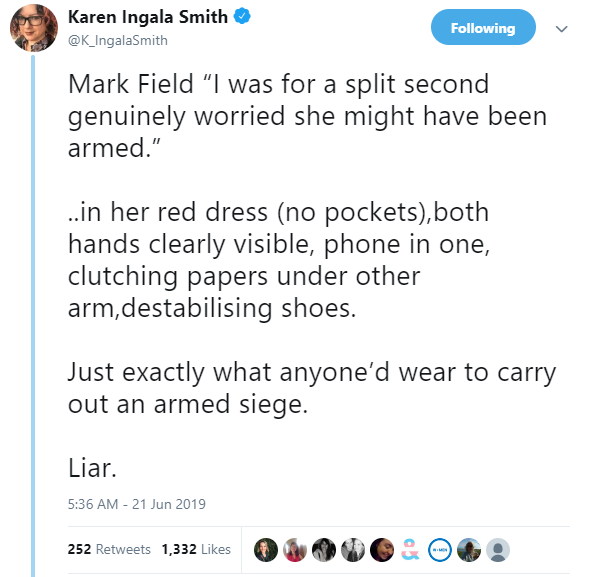 Activist and Chief Executive of a charity supporting women subjected to sexual and domestic violence, Karen Ingala Smith tweets about the incident.

So I followed the story, watched the video and my first response was one I’ve felt a thousand and one times over my career: Oh god, I hope she is ok, followed very swiftly by rage. A fundamental rage that with impunity this man, like so many, feels entitled to put his hands on a woman, wrestle her and subsequently grab her by the back of the neck to march her off the premises.

As the CEO of a violence against women (VAW) charity why did you feel it important to raise awareness of this incident?

Women across the UK wake up every day in fear: fear for their safety, their sanity and their lives. I knew this was already a big deal, as it should be. I knew that victims and survivors would view it or hear about it, probably dozens of times, even if they tried to avoid it.

It is important those women know that we will call out male violence when we see it.

In the context of this case what I felt was most important was that Mark Fields is an elected official, a man who will have thousands of his constituents dealing with the fear of men’s violence and entitlement.

Last month, on 9th May 2019, Mark Fields  tweeted about women’s safety and ability to speak freely: 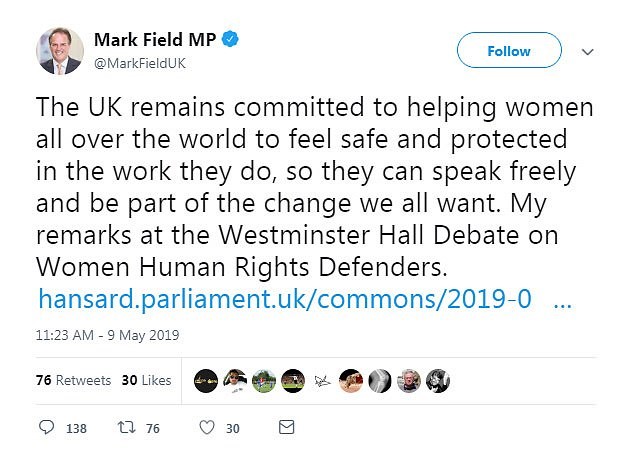 Approximately six weeks later, Mr Field ensured by the use of his own force that women do not feel safe or protected, or able to speak freely.

What is your response to those who disagree with you, who think that Mark Field is justified in acting the way he did?

Firstly I would say that everyone is entitled to disagree.

I, like most of the sisters I told you about on my timeline, am comfortable with people disagreeing with me. One cannot call oneself a feminist and not be ready for disagreement.

But in the nature of healthy debate, I would ask them to reflect on what they are disagreeing with.

My view is that the response from Mr Field was entirely disproportionate to the alleged and perceived threat posed by a woman exercising her right under Article 11 of the Human Rights act to peacefully protest.

Let’s look at the incident as it plays out (see video above) The woman is walking past Mr Field, she has a handbag in one hand and a mobile phone in the other. She is wearing a ball gown and a sash that clearly identifies what she is doing. Mr Field clearly has a few moments to think about what he is going to do and his response is a violent one.

Before he grabs her by the back of the neck, he pushes her and wrestles with her. This is not a person acting in fear that the other person is armed.

It is also notable in the face of so many comments from the public defending his behaviour that Mark Field has been suspended from his post as a minister, apologised ‘unreservedly’ to the protester in a public statement, and has referred himself to the Cabinet Office and Conservative Party for investigation.

Moreover, when Theresa May was approached by a male comedian at conference, he was gently led away from the stage and the Prime Minister’s only reaction was to make a joke about the Opposition.

I would ask anyone defending Mr Field to consider if the MP would have responded in exactly this manner to a man?

Is the response on social media unusual in terms of violence against women?

The fight to end male violence against women is endless.

We fight against it with a daily onslaught and societal back drop of victim blaming, minimisation and a constant stream of DARVO: Deny, Attack, and Reverse Victim and Offender.

I knew as the day progressed that I would see all of these things being played out. I knew I would see the laboriously familiar comment, ‘It doesn’t matter whether she is a woman or not’

But it does matter.

Until society can see that women as a sex class are subjected to endless threats, violence and sexist attitudes by men, I will keep seeing these comments.

Mark Field just played out a scenario that happens every day in the homes of many, many women. This is inextricably linked to male violence and to not call it out as such misses the point of the incident entirely.

Who are ‘The Grahams?’ Talking to My Sons About Brexit

S&C regular, local writer and PhD researcher Maddie Wallace speaks to her sons – aged 11 and 12 years – about Brexit to discover what young people know – and don’t know – about the [… read more ]

Gosport Voter ID: ‘A Solution in Search of a Problem’?

Rosy Bremer – part of our #ReclaimTheNews local journalism training team – takes a satirical look at the piloting of voter ID in Gosport last week, one of only five places in the country to [… read more ]

Inspired by the many fabulous environmental initiatives taking place in Portsmouth, Pens of the Earth was set up to encourage writers to celebrate existing projects, and to imagine what might be. This week Andy Ames reports on [… read more ]