Thinking ‘I must go down to the sea again,’ I did. I found the front -including the promenade, castle and common grounds – entirely closed off in (guffaw) respect of Donald Trump’s hijacking of what was to be the city’s official commemoration of D-Day. In truth, I’d been trying to work on my PhD but couldn’t concentrate due to the number of helicopters flying over my garden – so I decided to go and see the extent of the enclosure instead.

I found pathways already blocked off, with double-fence barriers some half mile from where the offending head of state will be. Beyond those are wooden fences some ten feet high which appear to be backed by either concrete or steel. The wooden structure is perhaps an attempt to make it more aesthetically pleasing. It does not. 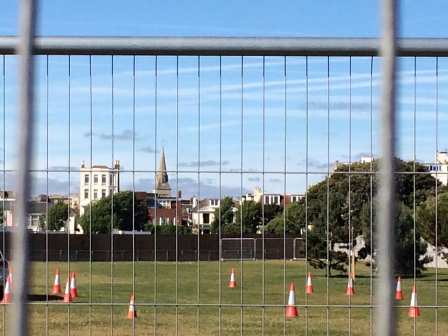 It is still possible to approach the landmark Naval Memorial, at the moment, but road barriers will soon be swung into place. Still, I walked along to take a few photos of the thousands of names commemorated on the memorial and the more personal tablets and mementoes added by the families and public who will infamously be denied access to allow a singularly self-interested Trump to attend.
Finding my way along the now narrow grass verge access, the rest of the common acreage being enclosed, I noted four more levels of barrier immediately beyond. In what seemed an ironic gesture, one level was screening decorated with images of trees: their plastic presence a literal fabrication of what was being denied.

I took my time at the memorial. The pathways having been sandblasted clean and newly cemented to appear pristine – or was it to reassure the paranoid Trump there are no germs lurking in Portsmouth? Beyond the stone entrances, only one currently in use, newly laid lurid green turf has a constant supply of water – courtesy of a sprinkler system. It seemed unreal and reminded me of a dog cocking it’s leg and peeing on the whole sorry affair. Two other ‘viewers’ commented to me on how ludicrous the whole thing appears. I didn’t disagree. 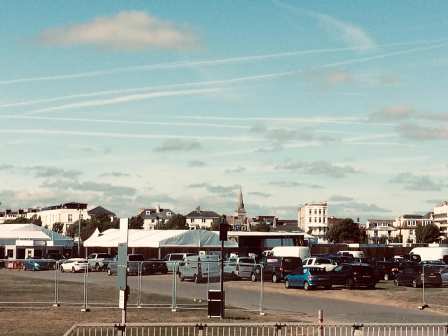 After spending time reading and recording some of the poignant commemorations I began to walk back. Noticing a breach in the fence where two of the high barriers had been opened on the diagonal, I decided to go in. There were two more fences between myself and the inner enclave where workmen (it appeared only men were present) continued erecting a number of stages and stands. The part I had accessed was merely a workers’ car parking area but I was curious to see golf buggies parked there in readiness for the presumably less-abled guests. Wanting a record, I took a photograph – and another of the two security guards who were acting as sentries through to the enclosure.

As I did, one of them began to walk towards me. I had no further wish to remain in the area, so smiled and raised my hand in a farewell ‘okay’ to him and walked away. I didn’t rush but went towards the still open road and down to a walkway at the side of the high wooden fence. I turned the corner and stopped, my eye taken by birds in a tree. As I raised my phone to snap their presence, I was approached by the guard. He had trailed me.

What followed was nothing short of an interrogation about who I was/am and why I was wandering into the area and taking photographs.

I gave plausible enough answers regarding my authority as a resident and Poet in Residence for the city archives. I told him I would be writing poetry based on the event and that the photographs were an aide-memoire to help me do that. I further told him the photographs would be offered to Portsmouth city archives, along with the poems, after the event. He remained polite, but clearly wanted to assert his authority with a level of intimidation. I didn’t tell him I have been invited to read some of my Portsmouth at War poetry at the alternative commemoration in the Guildhall Square, as an antidote to the imposition of Trump.

The intention is that this will be a family-friendly experience, one where Portsmouth residents and any other comers will be made welcome and which will run concurrently to the elite, by invitation only, public exclusion event down near the sea. 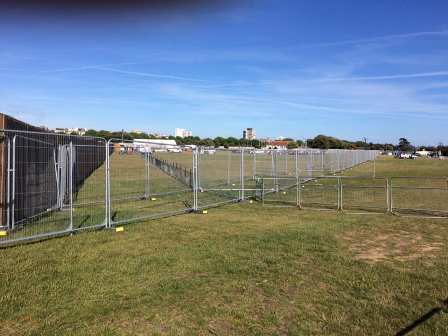 Stephen Harper, local resident and member of the Socialist Party of Great Britain

One thing many people object to about these state visits is the huge expense lavished on security and on setting up banquets and other special events, while working-class people in the country are struggling with their bills or going to food banks. It gives a little insight into the enormous waste involved in running capitalism and into the huge disparities of wealth that capitalism creates. And of course, many people object to what they see as Trump’s bigotry, racism, sexism, and so forth – hence the anti-Trump protests that have been organised by certain groups. As socialists, we aren’t concerned about particular politicians, however, and so we won’t be protesting against Trump specifically on Wednesday. What we want to see is the end of a cruel and exploitative profits system that Trump – along with all other capitalist politicians – represents. To put it simply, for us the problem isn’t Trump, it’s capitalism.

Putting aside Trump’s overt bigotry, flirtation with the far right and hostility towards environmental protection, his track record with the military is not what most would expect from the commander-in-chief of the American armed forces either.

He managed to avoid military service himself during a period when many of his contemporaries were called up and yet he still found time to belittle and disparage those who had served. He ridiculed veteran John McCain, who was a politician from his own Republican party, for having been a prisoner of war in Vietnam. ‘He’s not a war hero,’ said Trump in July 2015. ‘He was a war hero because he was captured. I like people who weren’t captured.’

In 2016, Trump mocked the mother of US Army Captain Humayun Khan who was killed in a suicide attack in Iraq in 2004 and received a Purple Heart and Bronze Star.

In 2017, Trump spoke by phone to the then recently widowed wife of Sergeant La David Johnson who was killed in action. Trump was supposed to offer his condolences to Sergeant Johnson’s wife Myeshia, but was flippant and could not recall the American serviceman’s name. Mrs Johnson reportedly wept during the conversation.

There are of course other examples of Trump’s attitude of ignorance and contempt towards people who have served in the military.

If anybody wants to defend his presence at the D-Day event in Portsmouth they are entitled to their opinion. Those of us who maintain that it is disrespectful to the memory of those who fought fascism in World War II are entitled to our opinion too. After all, freedom of speech and the right to protest are amongst the things that the Allies fought for all those years ago, and that many continue to fight for to this day.

The demonstration in Portsmouth on Wednesday 5th June will be held in the Guildhall Square at a respectful distance from, and out of sight of, the D-Day commemoration itself.

Continuing our new series of stories from our Young People’s Voices project – funded by Victorious Festival and supported by the University of Portsmouth – students at Havant and South Downs College, Frayja Roberts and [… read more ]

How has the pandemic affected the local voluntary sector? In a three part series, Covid-19 Community Reporter Paris Ali-Pilling interviews Citizens Advice Portsmouth’s Chief Officer, Sandy O’Neill to find out how the pandemic and lockdown has affected [… read more ]

Pens of the Earth: A Year of Lily’s Sunflowers

By Annie Kirby On her sixteenth birthday, Lily Shah opens her front door and stands at the top of the steps leading down to the street. She can’t remember the last time she felt brave [… read more ]