In the second of a two-part interview, Helen Salsbury talks with Michael Woolley, the Chair of Friends Without Borders (FWB), a Portsmouth-based charity providing support and advice to asylum seekers.

I wanted to know more about what it means to be a ‘refused asylum seeker’ and about how the Friends Without Border’s Access to Justice project is able to help asylum seekers to navigate the complexities of Immigration Law.

During the first part of our interview, Michael told me three groups use the drop-in centre.

‘We get the asylum seekers who are NASS supported [receiving government support], we get the failed asylum seekers [who are working on fresh appeals], and then we get people who have gone through the whole process and won their claims and are now refugees.’

How do asylum seekers arrive in Portsmouth?

Michael explained that asylum seekers have no say about where in the UK they are sent, or ‘dispersed’.

‘Dispersal is basically to areas of low-cost housing. So lots of asylum seekers are in Glasgow and [other areas in the North] and [much smaller numbers are dispersed to the South East].

‘When they are dispersed here they are looked after by NASS, the National Asylum Support Service, and they are given a bedsit and, I think, it’s £36.95 a week. We [FWB] don’t give any support to people who are getting NASS support. We can’t afford to. And the process then takes, it can take months, it can take years in some cases, before they go up to court in Hatton Cross in London and if their appeal is upheld they are then granted asylum which may come in one of two forms. If it’s not upheld they become destitute.’

You lose a lot of that [NASS] support if your appeal is not upheld?

‘You lose it all. Basically our failed asylum seekers and the Windrush people are in the same boat, they are caught by the same legislation. They are excluded, effectively, from the welfare state.

‘There are areas which are grey areas, like medical treatment. The Daily Mail makes a great fuss about people coming here and capitalising on our medical services and so the government clamps down and says, “No asylum seeker will get medical services.” But then they find they can’t. Because the doctors, who are trained, of course, to help people in need, don’t really want to play the role of Immigration Officers.

‘We had a case where a man who was excluded went for an eye test in QA. He’d done all the right things, he’s a very peaceful, amenable and correct sort of man. He’d asked me whether it was allowed and I’d said “Yes, you’ve got an HC2,” the form that allows it. And he had his eye test and then came back to me terribly anxious because he had received a bill for £300, which was crazy.

‘And I wrote to the hospital and I said, “Look this man is destitute. He’s living on the streets, doesn’t have a penny to his name. We’re supporting him with £20 a week. There is no way he can pay you £300.” And they wrote back and said, “Well, now we’ve talked this over and he can pay £30” and of course the charity [FWB] paid the £30 and it was all cancelled, but that’s what I mean by a grey area.’

Since 2014, FWB has provided an Access to Justice service providing free advice. However, the provision of legal advice is tightly regulated and requires experienced and qualified staff. Qualifications are hard to get.

‘You have to qualify for the Office of the Immigration Services Commission (OSIC). It’s basically a legal exam. It took [one volunteer], a Senior Lecturer [who is] pretty bright, a year. And in a year he scraped in [at] Level 1, which means basically he can do a few bits of form filling.’

Michael told me that since the retirement and subsequent death of John Bingham, who was qualified to OSIC Level 2, the service faces challenges and is reliant on two other volunteers who both have full time jobs.

‘Access to Justice is now under a huge amount of pressure. It’s free but it’s very limited.

‘A lot of it is form-filling, and they are complicated forms sometimes. If you go wrong with your form-filling, you are potentially liable to prosecution so you have to have legal insurance and we do. That’s why we, as the drop-in advisers [case workers], can’t do humble things like filling in passport applications because if we did make a mistake it could be disastrous.’

Despite these difficulties, Access to Justice continues to provide advice and support, with some heartening successes. However, it can take people a long time to get the legal help they need. Michael gave me an example.

‘It was [initially] dealt with by Access to Justice. John retired before getting it in. I took over the papers and found a solicitor. It took eighteen months. It was with a solicitor for 12 months. Solicitors are so slow, they have a huge bundle of cases.’

I asked, ‘Who pays the solicitors?’

‘They are legal aid. And there are very few solicitors now. There used to be loads of solicitors and now Leonard Cannings, in Southampton, is the only local solicitor which has a legal aid contract to do immigration.’

‘They have to travel to Southampton?’ 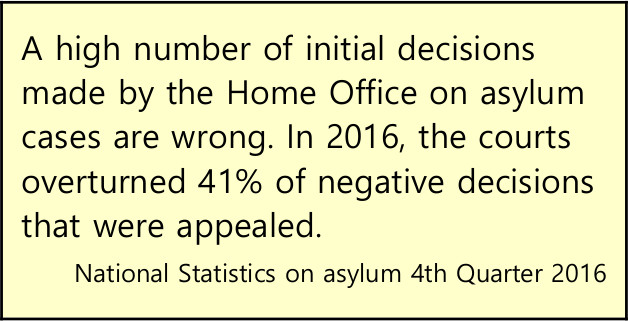 A patchwork of service provision

This isn’t the only time asylum seekers have to travel outside Portsmouth. Michael told me that in 2018, the requirement for asylum seekers to report to the authorities (normally done at a police station), was moved from Portsmouth to Fareham.

‘It’s a complete nonsense. You know, it used to operate from Winston Churchill Avenue. The asylum seekers themselves are dispersed to Portsmouth, the Immigration Office is in Portsmouth, and it’s all being done in Fareham.

‘So it’s as inconvenient for everybody: Immigration Officers, asylum seekers and us, as the people who pay for the asylum seekers to go. The ones who are given NASS support have to sign on sometimes but they get a bus pass from immigration. It’s the ones who are excluded from the welfare state who don’t get the bus pass.’

In addition to providing weekly support to refused asylum seekers and meeting the costs of the drop-in centre and Access to Justice, FWB also assists asylum seekers with travel and legal fees. A full break down of FWB expenses are available in their annual reports. 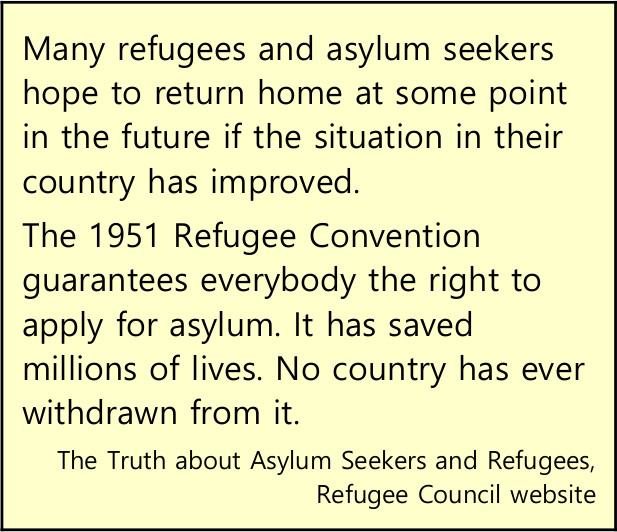 Are there any other places in Portsmouth for asylum seekers?

I asked whether there were other places in Portsmouth for to build and be part of a local community. Michael told me, ‘A lot belong to churches [or to] mosques’. He mentioned the three-week-long Journeys Festival, which has taken place in the Autumn for the last two years.

‘I think we are basically the hub, really.

‘The drop-in has become a sort of social centre. [There’s] one man who we never see now for questions or at the tables to give advice. He just comes because it’s a nice, safe social space just to have a coffee and meet his friends on a Thursday morning. That is fine because these are fairly marginalised people in society and it is a perfectly honourable and right thing to provide them with a space, a safe social space and a free cup of coffee.’

Michael talked about other things he would like to set up, mentioning that they’d like to start a football team, and adding, ruefully, ‘It’s a twinkle in someone’s eye, at the moment.’

He explained that as asylum seekers are not allowed to work, their time is often free.

‘I think the rule says you may not do work paid or unpaid, they’ve got a lot of time to fill. It’s very good for asylum seekers to do something, to feel esteem, pride, self-respect. We’re exploring all sorts of things we might do, just getting an allotment because a lot are from rural backgrounds and used to growing things.’

He adds, ‘Whether they’ll stay for long enough to see their produce grow, I don’t know.’

If you missed it last week, don’t miss the first part of Helen’s interview with Michael from Friends Without Borders here on S&C.

Learn more about Friends Without Borders and follow them on Facebook for ways to support them and get involved.

Make a donation to FWB.

Find out about ways to volunteer for FWB:

Want to find out the truth about asylum? Have a look at this useful guide from the Refugee Council’s website.

Stories from the City: Alby Clover

S&C is proud to share Portsmouth City Council’s Stories from the City project, which aims to ‘celebrate the people behind Portsmouth’s vibrant voluntary and community sector – one story at a time.’  Alby Clover, volunteer [… read more ]

If there was ever a good time to think about what diversity and inclusion mean in Britain today, the time is now argues Dianna Djokey, as she examines the role of the city’s museums in [… read more ]

Are We Losing Our Community Spirit? The Struggle to Keep Southsea Greenhouse Alive

Sue Stokes, founder of Southsea Greenhouse Community Co-operative, explores the social revolution at the heart of community groups and the challenges involved in keeping the dream of a caring, sharing Portsmouth alive. When I left [… read more ]