Emily Priest reviews a new addition to Portsmouth’s seaside food culture and a new favourite in her tour of Southsea eateries.

South Parade pier reopened on the 14th April this year but work has still been taking place since then. Four months later, a vital piece of the puzzle has settled in.

On the 3rd August, Deep Blue opened their first restaurant in Portsmouth on the pier; the company also runs the fish ‘n’ chip shop on Eastney Road. Although the manager says they still have work to do on the new restaurant, personally, I think they are already there.

As you walk through the two large doors, this does not feel like your typical fish and chips restaurant. The interior is beautifully ornate, with chandeliers reflected in large mirrors, and decorated lamps peppering the walls. Deep Blue is light and airy with an open plan kitchen on the right of the restaurant, and on the left a huge bar.

The pier is the perfect back drop for Deep Blue, with windows opened wide to the blue summer sky and the pier stretching away to where fishermen wait for the catch of the day at its end. You can spot the waves drifting along towards the Isle of Wight, faded in the misty sunlight.

The menus are colourful and decorated with nice artwork of the pier. For a second, I contemplated stashing one in my bag but my conscience won and I settled on reading it.

There was a good range of items on offer – not just fish, but burgers, grilled chicken, salads and tapas items like breaded mushrooms. Of course, the traditional Cod and Chips was on show. The vegetarian options were limited with only two main courses: Quinoa Salad and Halloumi Burger, and at a push, a vegetarian Caesar salad bumps it up to three options. Prices were average and some items, such as the Medium Cod and Chips, were good value for money at £8.99.

The drinks menu had a good selection of wine, spirits and cocktails. They had symbols next to the wine to inform you which drink complements which dish; a nice touch, I thought.

I ordered a glass of rosé – Rugged Ridge Zinfandel – and the Langoustine to start. The waiter was incredibly friendly and helpful, asking me how I was and helping me to pick my starter. Initially, I didn’t know whether to go for the Langoustine, squid or fish cakes but in no time, I made my decision as he carefully described each one. As he talked, I dreamily stared into his ‘deep blue’ eyes, already having high hopes for my meal.

My wine came out in no time at all in a large glass; perfectly chilled. With one sip I knew I had chosen correctly. It was fruity and crisp and went down smoothly, too smoothly. As I held myself back from necking the entire 175ml, my starter arrived. The presentation was great with a pile of prawns in an iron pot (see left). Thick chunks of sour dough sat on the side next to some tools to help me crack open the shellfish. Each one was complete with claws and legs, piled on top of one another, covered in garlic, oil and herbs. Steam oozed from them as I started to peel off the shells. The meat inside was soft, delicate and full of flavour. Although each one had little flesh, there were plenty of them to make up for that. The meat was gorgeously packed with garlic but a little gritty at times. I ate the sourdough with the leftover oil and cleaned my fingers in the dipping bowl.

Already impressed, I ordered my main, Medium Cod and Chips. I could have chosen something more exciting, I know, but you need to make sure they can get the basics right. I mean, what fish and chips restaurant would be any good if they can’t even cook the food in their name, right?

The food arrived soon after but my fish and chips was not medium-sized, surely. A thick slab of fish covered half of a huge plate, the other half piled with chunky chips. A pot of mushy peas and tartare sauce came on the side.

I cut the fish in half to reveal its soft, white insides. The flesh fell apart and the batter was light. It was very tasty and not heavy or greasy as most battered fish can be. Smearing the tangy tartare on top, I finished as much as I could. The batter could have been cooked a tad longer as although it was crunchy in parts, it was slightly soggy in others. The chips were traditional chip shop chips but I couldn’t finish them all. After a handful, I was at my limit.

Of course, that didn’t stop me ordering dessert. The dessert menu had some interesting choices: a brulee, sticky toffee pudding and a range of tortes, including pistachio, Cherry Bakewell and triple chocolate. I did a double take at the Triple Chocolate Torte but decided on the Chocolate Mess instead. 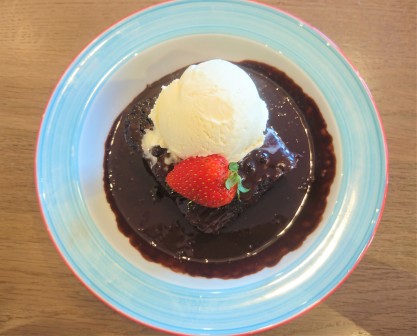 I realised my mistake as, when it was handed to me, this dessert was huge. In a bowl was a brick of steamed sponge, smothered in a rich chocolate sauce. On top was a dollop of already melting vanilla ice cream and half a strawberry. I took a big spoonful. Unlike most sponges, it was moist and springy. I tried to eat it all but despite my best intentions had to give up half way through. My stomach was so sore but in the best way.

I thoroughly enjoyed Deep Blue and was impressed by both the setting and the food. This is a worthwhile addition to the seafront and does Portsmouth proud. If the restaurant is this good now, I can’t wait to see their future after the team have made the changes they have in mind.

Deep Blue, you are certainly the ‘plaice’ for me.

The Pride of Portsmouth 2017

Emily Priest reviews Portsmouth Pride – her first Pride ever – after a new committee takes the reins and finds love, community and a little bit of bad singing.  Portsmouth Pride returned to the city [… read more ]

Portsmouth BookFest 2020: ‘An Evening of Poetry’

To celebrate this year’s Portsmouth BookFest 2020, S&C Contributor Amanda Garrie writes about her experience of going to one of the events, ‘An Evening of Poetry’. T’Articulation took themselves to 113 Art House Coffee on Monday 17th [… read more ]

Continuing her quest to eat out at every Southsea eatery worth eating in, Emily Priest drops in to a delightful global fusion restaurant to sample ‘the fifth taste’.  What is the fifth taste you may wonder? It’s meaty [… read more ]