In light of recent electoral results in Northern Ireland and the upcoming Queen’s Jubilee, writer and postgraduate student Claire Udy considers how British identity is shaped by assumptions about not only the past but the future.

After Sinn Fein’s victory in the Northern Ireland Assembly elections, a caucus of leftist memetists are rejoicing at the prophecy as told by Star Trek: The Next Generation. 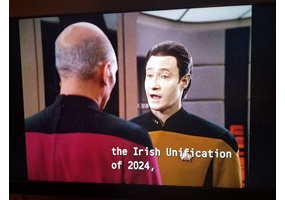 This news, whilst quietly celebrated by myself and others, naturally gives many Brits the willies. Foreign Secretary Liz Truss has been floating a potential amendment of the Northern Ireland Protocol for a while now and since the Sinn Fein win, things have kicked up a gear. We are currently in the territory of trying not to break the Good Friday Agreement, so an amendment is understandable but not one that seeks to further divide Ireland.

To some this may seem insignificant whilst there is conflict still unfolding in Ukraine but I can assure you, just because it is not armed conflict (although very arguable), this does not make it any
less serious. Truss’s legislation change teamed with the Queen’s speech, the newfangled British Bill of Rights and the Platinum Jubilee will see June arrive with a wave of carefully concocted British nationalism.

My first meaningful memory of realising that we (the British) were the baddies was in year 8 history class, as we watched Zulu (1964). A genuine effort had been made by my history teacher to teach us about colonisation, but I am ashamed to say a lot of it flew over my head. I grew up in a low-income household, and my parents worked shifts in a casino. A lot of my childhood was spent on my own at home and the only things to keep me company were the TV, early internet and copies of the Daily Mail. The only political thought I had mustered by then was that I was not keen on invading Iraq, which developed into the vociferous anti-war view I still hold today.

It was only as I became older that I realised the full extent of what we had done as a nation. I want to blame my lack of giving-a-shit on my undiagnosed ADHD and neurodivergency, but my very white privilege also plays a huge part. We were classed as piss-poor but I was still white and I still had a roof over my head and food to eat. It is no excuse really. If I do not want to know about something, it simply does not exist to me. My brain blocks it out. It is only when I choose to learn that I really do take information in. To make matters worse, the Daily Heil was a huge part of my formative education (I really enjoy reading a paper and it was the only one there), and it has taken years to erase that ‘education’.

When I finally completed my degree in my early thirties, the last piece of work I submitted was on the Good Friday Agreement. I am no expert in the area but I am certainly no lay person either. I was 10 years old when the Good Friday Agreement was signed, so why was I only learning the true extent of The Troubles as an adult? Why was I only just learning about the crimes committed by the British Army? Why was I only learning about Irish history when their land is so close to mine?

Like many others now, I feel uneasy when I see the Union Jack. A flag which I feel should be consigned to the bin. Such as the statue of Edward Colston in Bristol, and maybe more controversially so, our idolisation of Winston Churchill. All of these are a constant reminder of my cultural identity tied up with colonialism. We absolutely should be reminded about what we did as a nation (and still continue to do), but there are reasons why we are haunted by these figures and it is not to make us feel bad, their haunting exists to keep us in line.

A lot of people want to be haunted, whether they think so or not. A distant memory which may be our own or passed down through generations, in this case a positive signifier of better times. A
haunting in this context is when we take our positive memories and associate them with cultural artefacts. Those artefacts are usually common with other peoples also. For instance, when I was younger the Union Jack signified the end of World War II and stirs up memories of triangular bunting (and the street parties in my hometown), as well the opening credits of a beloved television favourite, Dad’s Army. It then became a bastion of feminism, as 9-year-old me watched Ginger Spice in that dress at the BRIT Awards. All positive associations, which we are entitled to have.

But. As we enter an age of very late capitalism and a new generational enlightenment (the woke Zoomers), we should be approaching the more offensive artefacts with critical thought, and not hostility when we question the past. This is ultimately how the culture wars were born, with the right-leaning governments (and dominant economic ideology) hoping you will defend the things that you associate with your happier times, so you do not think of the future.

With our world in a state of economic decay, it is incredibly hard to imagine the future. Not a dreamed-up fantasy, an actual future. A future where our children are not drowning in the rising ocean, a future where we are not threatened by the threat of total annihilation, a future where we can afford basic utilities. Why do we struggle to think of this future? Why do some struggle to fight for it? We acknowledge things are bad and will carry on being bad, but our defence mechanism wants us to yearn for the past. When we do not think of a post-capitalist and perhaps Utopian future (which is not as hard as it sounds), then people are free to carry on doing what they do in the name of capitalism. This is ultimately why we accept our haunting, and associate our memories with cultural artefacts to reinforce our views and remember happier times. Therefore this kind of haunting links directly into the Culture Wars. That is why occasionally we are bombarded with signifiers to make us forget about what is happening, and reinforce a dominant view.

The bombardment of us by the Union Jack was always going to happen in June. It is for many a time to celebrate Queen Elizabeth, and we are able to reminisce about the better times. Maybe some will recount the street parties during 1977, telling us how it was a better time then and reinforcing our cultural memory. It is also a time when the government can raise national pride just enough for no one to care that people are faced with a very real decision to heat or eat this winter. That there is a major risk that The Troubles will return. That the government is planning to scrap the Human Rights Act. It is okay though, The Queen celebrates her anniversary and we get our carnival to stop us revolting, all the time waving our little flags.