In an era of stratospheric salaries for footballers, author and journalist Barry McLoughlin looks back to Pompey’s remarkable 1939 FA Cup triumph – at a time when skipper Jimmy Guthrie said players were ‘serfs and slaves’. In his new book Barry, stepson of Wembley star Freddie Worrall, describes how – just four months after the final – the players were shown the dressing room door clutching their £20 appearance bonuses.

FROM INSIDE the ‘lucky’ Number One dressing room beneath the Wembley stands, great gales of laughter wafted up towards the terraces where the Pompey chimes – ‘Play up Pompey, Pompey play up!’ – rang out in counterpoint before the 1939 FA Cup Final. The crowd of nearly 100,000 on April 29 was the biggest since the famous first Wembley final 16 years earlier.

Pompey’s skilful but superstitious right-winger Freddie Worrall had just gone through the Cup-tie match-day ritual of clipping on manager Jack Tinn’s ‘lucky’ spats over his shoes. The left one had to be buckled first. Usually stored in the safe at Portsmouth’s Fratton Park ground, they had taken Portsmouth successfully through five Cup ties, keeping a clean sheet in all but one of the matches. Just to make sure the auguries were completely favourable, Worrall also took to the field carrying a miniature horseshoe in his shirt pocket – these were the days when such things existed – a sprig of white heather in each sock and a lucky sixpenny-bit in one of his boots.

In an early example of sports psychology, Tinn had engaged the great Northern comedian Albert Burden to keep his team relaxed before the match, and their laughter showed it had done the trick.

Unfashionable and unfancied Portsmouth didn’t have much to lose: their opponents, the mighty Wolverhampton Wanderers, at five to one on, were the hottest Cup favourites for a decade. They were 15 points ahead of Portsmouth, who had just struggled out of the relegation zone.

Built round their dominating England centre-half Stan Cullis, and managed by the redoubtable Major Frank Buckley, Wolves were a brilliant and youthful side, studded with internationals, and were lying second in the League.

Then there was a knock on the Pompey dressing room door…

The Portsmouth players were handed the autograph book that is traditionally passed round the two teams before the match. Wolves had signed first, and when Portsmouth saw their opponents’ signatures, they knew they were in with a chance. The nervously scrawled names were barely decipherable.

So much expectation had been heaped on the young Wolves team that they just couldn’t cope with the pressure. By contrast, Pompey had appeared five years earlier in the 1934 final, and although they had lost 2–1 to Manchester City, Worrall’s experience in that game proved vital in 1939. (Cullis always denied the claims of quivering pens. He insisted they were normal signatures, just a little spidery.)

Two hours later, the outside-right and his Portsmouth team-mates were celebrating a barely believable 4–1 victory. King George VI, with Queen Elizabeth at his side, presented captain Jimmy Guthrie with the trophy in front of the capacity crowd. It was third time lucky for Pompey, who had also been runners-up, to Bolton Wanderers, in the 1929 final.

Worrall had starred on the right wing, with three assists.

It was of course the last Cup Final before the Second World War; Pompey kept the Cup for seven years.

So much in the football world has changed since then, of course. Although the FA Cup is still the oldest, most revered and most popular club competition in the world, its importance has been diminished by the top teams’ pursuit of Premier League, and therefore European, glory.

It’s the situation of the players that has changed most, however, and it’s due in no small measure to Portsmouth skipper Guthrie, who became a champion of players’ rights as post-war chairman of the Professional Footballers’ Union (now the PFA). At the time, as Guthrie put it, a professional footballer was a ‘bondsman, a serf, a slave’. Portsmouth players each received £20 for their Cup Final appearance and shared a win bonus of £550. ‘We later learned that the massed bands were on a bigger pay day,’ he recalled.

Unlike today, income from advertisements was minimal and the team would not agree to charge the press for photographs. The players did all receive a fashionable raincoat, and a Portsmouth tailor promised a bespoke suit for every Pompey goal scorer. Cliff Parker, who scored twice, later said he wanted the value of his second suit to be divided instead between the two Portsmouth reserves, Bill Bagley and Abe Smith.

On September 2 1939, Portsmouth played their second game of the 1939/40 season in the First Division and that was the end of the Football League until 1946/47. The players were paid fortnightly, but when they went in for their wages on September 5, they were handed only one week’s money – and the news that all games and contracts were cancelled. If a player wanted to appear for another club near his service unit or workplace, should football restart, he would have to apply for permission in writing.

There were arguments in favour of the maximum wage. When it was abolished in 1961, it was £20 a week – a reasonable salary at the time – and it meant the players were embedded in the community and mixed with the fans on more or less equal terms. The wage cap also allowed ‘smaller’ clubs to compete on equal terms with their big-city rivals. Abolition broke the bond between the professionals and those who paid their wages. It also led to  much greater rewards and much higher profiles for the stars… Johnny Haynes became the first £100-a-week player, and there was the first £100,000 transfer fee (less £1) for Jimmy Greaves in 1968.

Over the past two decades top footballers’ pay has risen by 1,500 per cent against the average UK wage increase of 186 per cent. Players’ wages generally make up about 70 per cent of a club’s turnover and sometimes, in the topsy-turvy world of football, more than 100 per cent of it.

Freddie Worrall was my stepdad, and if he’d been playing today would probably have been a millionaire. Instead, he earned the maximum wage – a very respectable £8 a week at the time (£6 during the close season) – and when his career was over went back to working (contentedly) as a maintenance man at a factory near our home in Warrington, pursuing his love of sport as a trainer and part-time manager.

He died in 1979, 40 years after the final, aged 68, having won many of the game’s greatest honours and being capped twice for England.

Sadly, as merely his stepson, I didn’t inherit any of his footballing talent, but I was lucky enough to be taken to Anfield every fortnight to watch his best-known protégé. As manager of local amateur club Warrington Town, he had discovered legendary Liverpool striker the late Roger Hunt, who went on to win the World Cup with England in 1966.

Born in Warrington in 1910, Freddie started his professional career at Oldham Athletic. Moving to the South Coast in 1931, the small, wiry winger played 313 League games for Portsmouth and scored 68 goals, and made 26 Cup appearances, with six goals.

If it hadn’t been for the war, he probably would have gone on to even greater things; he was 28 when it broke out and 34 when it ended – six vital years for a professional footballer. During the war he was a member of the Auxiliary Fire Service while still occasionally playing for Portsmouth in the makeshift wartime leagues, but his main club was his old employer, Oldham.

On his retirement he maintained his sporting involvement as trainer for the famous Warrington Rugby League Club when they won the Challenge Cup in 1950.

Nearly 70 years after Portsmouth’s 1939 victory, I was back at Wembley in 2008 to see them win the Cup once more against Cardiff City at the new Wembley. (Pompey received £1m in prize money, nearly 2,000 times more than their 1939 predecessors.)

From the vertiginous heights of the new Wembley’s ’top deck’, the players far below almost looked like Subbuteo men. In truth, Portsmouth’s 1–0 victory had little of the drama when they had last won the Cup in 1939. This time, Pompey had been the favourites and second-tier Cardiff the underdogs.

It was, however, a personal triumph for emotional Portsmouth manager Harry Redknapp as he claimed his first major trophy in a management and coaching career stretching back 25 years.

* With thanks to the Pompey History Society. 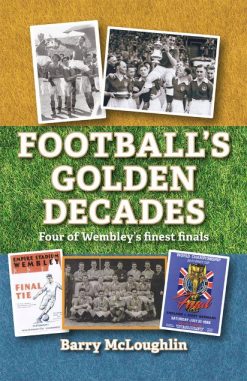