Christine Lawrence interviews Loree Westron about her novella Missing Words, set in Portsmouth and on the Isle of Wight.

Christine Lawrence (CL): When did you come up with the idea of writing about this era – pre-internet, mobile phones? Why choose this era?

Loree Westron (LW): I worked in the Royal Mail sorting office, here in Portsmouth about twenty years ago, and the idea came out of that time. Every now and then, I’d come across a letter with an incomplete address that had to be sent on to the Dead Letter Office in Belfast, and I wondered about the fate of these letters – about the messages they contained and whether they would ever be delivered. When I started writing the story a few years later, I knew I needed to set it in a slightly earlier time period, so I selected the year I first came to the UK – 1984. I needed to make things difficult for Jenny, and I also wanted to lessen the possibility that the sender of the postcard could contact his lover on the Isle of Wight another way. The story simply couldn’t happen now because communication would be instant – by email or WhatsApp or Messenger. He could have telephoned, of course, but international phone calls were expensive back then. He also could have sent a second postcard after realising his mistake, but Jenny doesn’t know that.

CL: What were the stumbling blocks in writing about a time in memory yet historical?

LW: Because it’s a relatively recent period of time, historically, there’s the advantage of being able to remember things first-hand, and also seeing the ‘big picture’ of how national and international events played out. Missing Words is set during a time I think I can remember quite well. The problem, though, is separating out what I knew then from what I know now. The other problem – and this is the big problem – is that readers will also remember this ‘near history’, and may in fact remember it more accurately than I do, so there’s always the worry that I’ll get reprimanded for having misremembered something. That’s why research is so important. But it’s also important to remember that we’re writing fiction, and not to get overly worried about the little things.

CL: How long did it take to write?

LW: The original version of the story was part of my MA dissertation, and at the time, it went through nine drafts during a period of about nine months. I continued to tinker with it, intermittently, over the following years as I sent it out to novella competitions. When I submitted it to Fairlight, in was about 2000 words short of their minimum length. But they liked it, and asked me to expand it by 50%. That took another couple of months.

CL: It must be difficult to find time to write while also having a busy career.

LW: That’s always the challenge, isn’t it – making time to write while earning a living. You have to make it a priority. I’m an early riser and I always feel most productive first thing in the morning when the world is still quiet. I try to give two hours every morning to my writing, before going to work at my day job.

CL: Writing is a solitary occupation. How did you discipline yourself to write?

LW: It goes back to making it a priority. But it’s tough, sometimes. I go through periods where I’m very disciplined and it’s easy to keep the morning writing routine. But then there are other times when it all goes out the window. Deadlines help. I’m good at meeting deadlines. As for writing being a solitary occupation, I’m a bit of a hermit, anyway, so I don’t mind being on my own. But having friends who are also writers is essential. They understand the struggle.

CL: What is the significance of cycling in Missing Words and how much is this influenced by your own lifestyle? 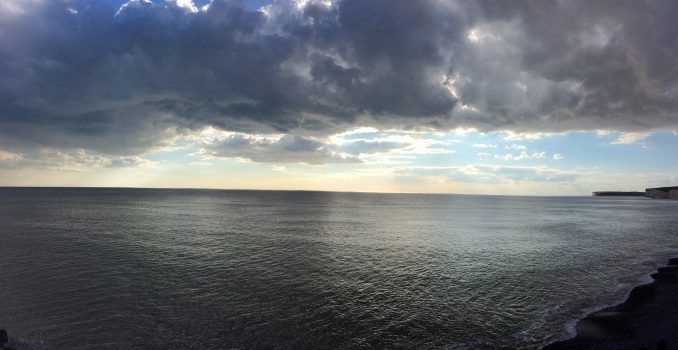 LW: Like most kids when I was growing up, cycling was the way I escaped home and explored the little world around me. So bicycles and cycling have always represented freedom in a very real sense. Over the years, I’ve done a lot of long-distance cycle touring, and have spent months at a time cycling across various continents. Cycle touring has taught me a number of life lessons, and I wanted to pass some of these lessons onto Jenny. There’s a scene in Missing Words where Jenny struggles to get to the top of a long hill on the island. She’s really only ever cycled around Portsmouth before – which is pretty flat – and at the beginning of the book she doesn’t know much about shifting gears and climbing hills. But in this scene, when she finally reaches the top of the climb and looks back at what she’s achieved, she feels empowered. She’s accomplished something she never thought she could – through grit and perseverance. It’s a good lesson for her and gives her a greater sense of confidence. Cycling also gives Jenny time away from her normal routine and the normal distractions of life. It gives her time to think. She’s been running on autopilot since the death of her daughter, but the repetitive rhythm of the road as she pushes the pedals round allows her mind to clear and ultimately allows her to begin to heal.

CL: Did you cycle around the Island during the process of writing or was it all done from memory?

LW: I’ve cycled on the island quite a lot over the years and enjoy getting lost on its back roads. When I wrote Missing Words, I made several trips across the water with my bike and an Ordinance Survey map, and plotted out the route that Jenny takes – three loops cycled in three days, travelling through all of the main towns and villages.

CL: How did you decide on the ending? Was it something you’d already planned at the start?

LW: Yes, I knew the ending when I began writing. I usually do. I wanted it to be truthful to the characters and to be realistic. I didn’t want a fairytale ending, or anything that was too neatly tied up. But I also wanted to leave the reader with a sense of hope about Jenny’s future. Riding around the island and having time away from her ‘real world’ in Portsmouth has given Jenny time to think and heal. She’s been able to reconnect with who she is and think about what’s really important to her and what she wants out of life. At the end, Jenny can go in any direction. She makes a specific choice, but who knows – she might change her mind. The important thing for me, though, and the thing I hope the reader takes away, is that she’s been empowered to make those choices for herself. She’s no longer at the mercy of other people and events.

CL: Did you develop the characters from people in real life or were they all completely fictional?

LW: There are two characters in the sorting office who are very loosely based on people I knew when I worked for Royal Mail: Roger, Jenny’s only real ally, and Taylor, her line manager and adversary. The rest are composites.

CL: Which part of writing do you find the most exciting? And the most tedious?

LW: It’s great when a story takes an unexpected turn – when it reveals something I didn’t consciously plan. That’s really exciting. And I really enjoy the editing process, too, fine-tuning the words and getting the rhythms right. My least favourite part about writing is what to do after the story is written. Searching for markets and submitting stories for publication is a chore.

Missing Words is available locally from Pigeon Books and online from Bookshop.org and other online booksellers.

Further information about Missing Words can be found at Fairlight Books.

During BookFest, Loree will be in discussion with other local authors at A funny thing happened while researching my novel on 23rd February, From Inspiration to Publication on 7th March, and Literary Fiction – ‘an Intensity of Language’ on 13th March. Tickets are available from EventBrite.

The full BookFest programme can be found at Portsmouth Libraries.

Loree occasionally blogs at Words on a Page.

Christine Lawrence had always believed belly dancing was solely for the titillation of men, originating in female slavery. So when she was invited to a taster session with the Awakened Belly Dance group, she tried [… read more ]

Bookfest, Portsmouth’s three week celebration of literature, is collaborating with Mystery People, the crime fiction promotion group, to put on an exhilarating event involving some of the best crime writers in the business. Local novelist [… read more ]