Dianna Djokey: Have you seen a rise in calls to your service?

Shipa Ahmed Khan: We’ve done welfare checks [so] we’ve been able to manage that spike. I have been getting a few more calls than normally.

It’s sometimes giving people that bit of reassurance, like yes, it’s a difficult time, but our services are still available. In particular, I’ve had maybe one or two ladies who have found it very difficult to get access to the GP. With an interpreter, they’ve gone to their GP or they’ve had phone conversations but not really understood what’s been said, so they’ve had to make another call, another appointment. It’s been difficult but the way I’ve worked around that is when women are going for their appointments or for their blood tests, they let me know and I send them a text message containing the information that they can show to the receptionist.

Another lady [I work with] goes to the GP for blood tests but she doesn’t fully understand what’s going on with her condition and is unable to convey to the receptionist that she needs an interpreter because it’s wasting the GP’s time and the surgery’s time. Because they don’t have that in place she has to go again for the same issues. It’s little things like that we have to sort of figure out, little ways that we can support people in the community. Sometimes people ask me to come with them but that’s not within my role to do, but I’m happy to write a little message and try and encourage people to help themselves a bit more as well. 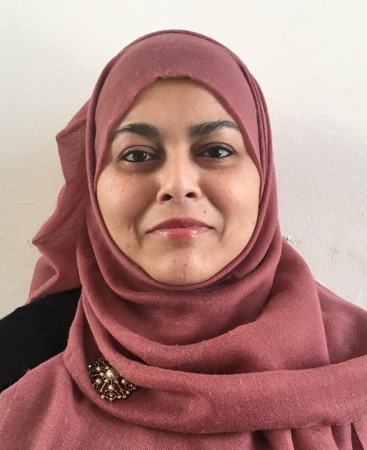 Have people found it easy to access services and community support groups?

It’s been difficult as it comes down to how much that individual is aware of what is available in the community. So for some people, they’re very aware, we’ve got HIVE in Portsmouth [which has] been coordinating a lot of support around Covid and signposting people to prescription services. For other people that don’t have that support at home, they found it difficult because they don’t know where to start: [for example] who do I go to, I don’t have access to the internet so I don’t have access to HIVE, and if I’ve got a phone number, I can’t speak the language so what am I going to say on the phone? So you really have to boil it down to the very basics.

I have quite a few groups that I’m linked with so I’ve just given out information if there’s anyone, your neighbor, friends, family, that doesn’t have access, these are the places [to] go where you can get support on their behalf. During Covid I have [also] organized lots of food packs for people from a community so that’s quite telling. You know people are struggling, but probably not always knowing where to go to get that extra support and help.

As a team, have you been supported?

We’re part of Portsmouth City Council so we have supervision in place, but we also have a smaller team. We do team meetings via Zoom, and we have socially distanced meetings in the park just so that we can support one another as colleagues, but also to find out from each other what different issues are with different community groups and that’s helped and been quite useful.

The type of work you do can be extremely taxing. How has that impacted you?

It’s been difficult, I must admit. It’s been difficult in the sense that I’m working from home. We don’t have access to the normal resources that we would have and as Community Development workers, we’re not able to go out. It’s trying to find ways of contacting community members, working in a slightly different way [and] reaching out, but it has been tough.

S&C has been awarded funding from the European Journalism Centre Covid-19 Support Fund to explore the social impact of Covid-19 on diverse communities and sectors in Portsmouth:

We have also been awarded funding from the Public Interest News Foundation Emergency Fund to explore the social impact of Covid-19 on migrants, and asylum seekers and refugees.

If you are interested in sharing your experiences in any of these areas, get in touch with us over on Facebook and Twitter, or email us at submissions@starandcrescent.org.uk

Photo by Edward Jenner from Pexels.

Chat Over Chai: ‘None of Us Expected Lockdown Would be This Long’ Pt I

How has the pandemic affected the local voluntary sector? This is the first of a two part series where Covid-19 Community Reporter Paris Ali-Pilling interviews Sandra Hall, Chair of Chat Over Chai, a community group to support [… read more ]

Portsmouth Start-Ups: ‘For Women Funding is Still a Barrier’

Who Has All the KerPOWer in Pompey Politics? Free Workshop

What do we really know about our elected representatives in Portsmouth? What are their interests, activities, attitudes and intentions? How are they accountable to voters? What connections do they have to external organisations? What connections [… read more ]