Ever wondered how the Covid pandemic is affecting other parts of the world? In this eye-opening photo essay originally published in Transit Dialogue magazine, the acclaimed and award-winning Filipino author, journalist and photographer Karl R De Mesa shares his experiences of lockdown in Metro Manila, a megacity of at least 12 million people.

Among the many habits we’ve learned as the pandemic’s progressed are new requirements of keeping apart, six feet distant for each person.

But it was hard for my body to pick up the routine of how to be socially distant.

I wasn’t alone. I found out it was the same for at least 12 million people in Metro Manila, barred from travelling outside the NCR last March 15, when community lockdown started. It was a hard lesson, since we’re naturally a touchy feely nation, with our instincts to poke, kiss, and engage in various levels of hugs.

For the longest time I simply didn’t go out and talked to my friends in the area on messaging apps. A dim surrogate for actual in-person conversation with its nuances and subtleties. I’m one of those folk who have a high tactile sense of things and while I was more than happy to indulge my introversion as a writer used to long hours of living in my head and as a latchkey kid of the 90s, my social behaviour with friends and family also depended hugely on being able to reach out and accentuate points by feel—high fives for shared jokes, clasps for shared misery, varying pressures on arms and shoulders for emphasis.

At our current total of almost 300k infected and more than 5,000 deaths, social distancing obviously still needs to be hammered in, just as high a priority as a clear and data-driven and efficient plan by authorities for containing our infected. Something almost palpably painful for me, personally, whenever I see someone I haven’t talked to and my brain remembers that it’s best for both of us not to touch. Somehow, I don’t think I’ll get used to just fist bumps or elbow bumps.

These shots were taken in the early months of the community lockdown in Makati, when the new habits of distance against Covid-19 still needed to sink in, counter intuitive but necessary. Almost six months in, my brain and body have yet to fully sync.

Chaos Before the Shelter

The grocery on March 13, two days before the 30-day lockdown with the hoarding madness in full swing. I had already gone to two other nearby groceries previous to this, but their lines were just way too long. I decided to stay and duke it out here.

You could taste the panic in the air, barely restrained and replacing the bonhomie of routine usually found at queues during weekend grocery runs. A Japanese couple talked in jittery, high-pitched tones, their anxiety and short fuses needing no translation. Household helpers kept calling their senoras for clarification on choice of brands. A family of four had brought their baby along in a stroller.

They had run out of carts hours previous, said the manager, but luckily I had brought two huge tote bags with me, intending to buy two weeks’-worth of supplies. I stuffed my choices in my totes, fell in line for almost two hours, fished out the items when I reached the cashier, and stuffed them back into my totes. The walk back home was a literally heavy one.

Don’t Step Across This Line 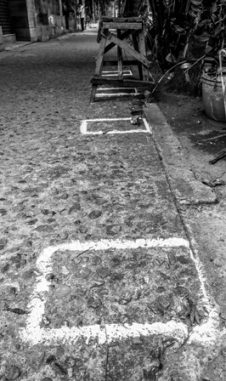 By early May 2020, folk had gotten the message that social distancing was the best way to personally protect yourself and not transmit Covid to your family. Businesses like this fast food chain along a major street in the Makati CBD had painted boxes or lines as markers of safety for the long queues that commonly snaked out to the curb. As of August, this Korean fast food chain at this location has closed down. 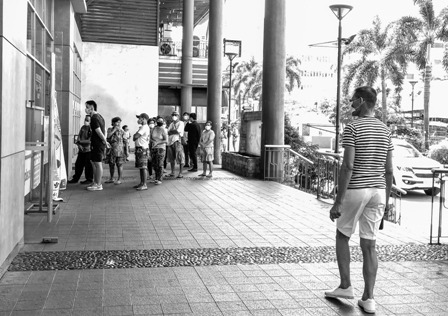 A mix of locals and trapped tourists queue outside a grocery store along Makati Avenue. The foreigners who were unable to get out before the lockdown are often afraid to venture too far from their hotels and billets, or go to the wet market with the locals. And while they’re frustrated to realize that they should’ve gotten to the line earlier (because only a maximum of 10 or 15 people are let in by batches) they often have no choice unless they pluck up the courage to walk far enough to another grocery. Often, it’s the elderly who would get turned away because they don’t have masks on. 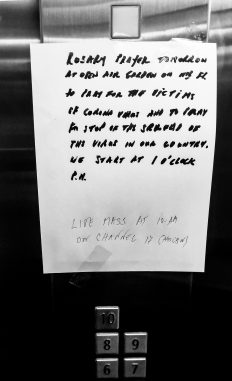 And I thought my handwriting was awful. A hastily scrawled sign inside our building’s elevator posted on April 4 invites residents to gather at the open-air garden on the rooftop. A bad idea, I kept thinking, even as they insisted people would stay six feet apart for the duration of Mass.

Masks at The Mall 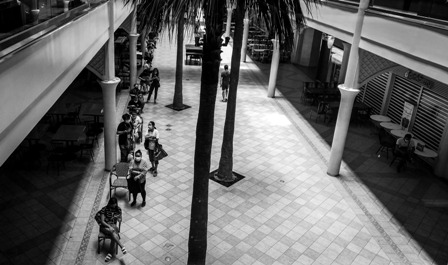 By mid-April those who usually make grocery runs for their household had gotten into the groove of the ritual for stepping outside their own door: mask, alcohol, tote bag, the crappiest and most comfy clothes in your closet, and the inevitability of another bath once you came back. I didn’t even take a bath on the rare days I had to fetch my wife from her supply runs, since I’d need to get hosed down again anyway. Save more water and the chance to be a filthy bastard outside sans anyone commenting? Hey, I’m up for that.

The Colonel is Always Open

No jolly jeeps. No carinderias [food stalls]. This was taken in late March. A dearth of open restaurants and establishments always meant a reliable influx of customers for those places that did manage to keep a skeleton crew on tap—a hard thing sans public transport. This particular fast food resto was always slammed not just with delivery riders getting take-out for their customers but also with employees from the government and corporate offices nearby.
The manager would pace about in harassed body language—seeming to keep it all together by sheer force of will—and follow up orders while multi-tasking by cooking quick cook items like fries.

There’s a bunch of white foreigners in the building where I live who enjoy the nightlife and the services for sale at the nearby Red Light District on the regular. My next door neighbor is one of those, an old and retired ex-military American, lives on the same floor and never fails to mention the few times we’d talked that he had a steady local girlfriend. ‘Everyone knows Filipinas are the prettiest women in South East Asia!’ he’d declare. The guy has been here for more than a decade, too. 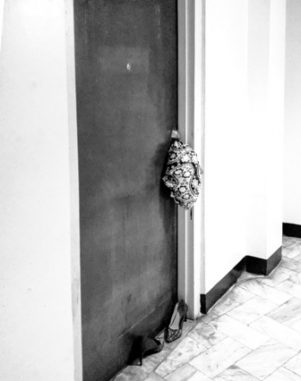 One day in late April, I found this dress and pair of shoes outside his door. It’s now late August and I still haven’t asked him about it even though we’ve said hi twice, passing each other in the corridors.

All images by Karl R De Mesa. Check out Karl’s other photography here.

‘Even Covid-19 Doesn’t Stop Stalkers’: Interview with a Stalking Advocate

How has the pandemic affected local services and charities, their staff and the communities they serve? Sarah Cheverton talks to Jess, a Stalking Advocate at Aurora New Dawn, a Portsmouth-based charity working with victims and [… read more ]

Last week S&C’s new photo journalist, Ian McInally attended both of the anti-racism protests in the Guildhall Square, held in solidarity with the protests taking place in the US. Here are just some of his [… read more ]

S&C contributor and Pompey Politics Podcast host Ian Morris shares his experience of the lockdown, as someone with diabetes. It’s Day 64 and Ian wrestles with (surely) inaccurate – and possibly even spiteful – weighing [… read more ]