Local charity Portsmouth Abuse and Rape Counselling (PARCS) has launched a new photography competition for young people to raise awareness of sexual abuse in our communities, the ‘Elephant in the Room.’ Sarah Cheverton reports.

The competition is part of PARCS’ Project Catalyst, which aims to ‘support and mentor young women to be leaders and activists for change, addressing sexual violence.’ The project was launched earlier this year and during a workshop, young women in the group created several images (see main image and below) that captured the ‘elephant in the room’ in different parts of the city.

From this came the idea of a photography competition to invite other young people in Portsmouth to get involved in the conversation and help raise awareness of sexual violence and abuse.

The competition is open to everyone aged 18 and under from Portsmouth and south east Hampshire. To enter, young people must take a photo capturing the Elephant in the Room, using their own elephant model (a picture, or a toy, for example). Entries are submitted by tagging @shrinktheelephant on Instagram, or by sending the images via DM if entrants prefer to remain anonymous.

PARCS were established by a group of local women in 1981 to ‘raise consciousness, challenge victim blaming narratives and rape myths, and to offer support and signposting to survivors of sexual abuse’. Rape Crisis England & Wales report that 31% of young women aged 18-24 report having experienced sexual abuse in childhood, while 20% of women and 4% of men have experienced some type of sexual assault since the age of 16, ‘equivalent to 3.4 million female and 631,000 male victims’.

So where did the idea for the ‘Elephant in the Room’ campaign come from?

The Survivors’ Trust, which represents specialist rape and sexual abuse services in the UK, launched the ‘Elephant in the Room‘ campaign in 2014. Two years later, PARCS adopted the campaign and bought a 10ft inflatable elephant which has attended hundreds of events in the city raising awareness of sexual violence, including Pompey Pride, the Great South Run and Victorious festival. The elephant is also used in the charity’s public awareness campaigns on social media and in the community.

Gemma Green, Project Catalyst Lead said, ‘The Elephant in the Room campaign aims to raise consciousness in our communities about the impact of sexual abuse and violence. Many of the images we’re using in the campaign have been taken by local young people, some during lockdown, to highlight that home is not always a safe place for survivors of sexual abuse, no matter how long ago the abuse happened.’

Gemma and the young activists of Project Catalyst now hope the photography competition will encourage more young people to get involved in raising awareness of the impact of sexual violence in the city.

The team are also working with local photographers and the Strong Island team to hold an exhibition to showcase all the images of the PARCS elephant in and around Hampshire. Details of the exhibition and competition prizes will be revealed shortly on the @shrinktheelephant account on Instagram.

‘We believe that every community has a part to play in responding to and preventing sexual violence,’ said Gemma, ‘We all have the power to shrink the impact of the trauma caused by sexual abuse.’ 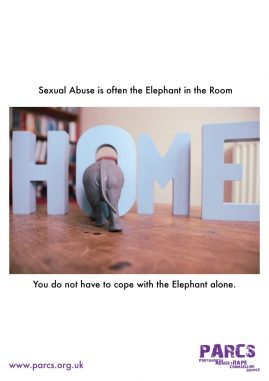 All images by Project Catalyst.

Every week, Express FM runs a live show dedicated to news about the Coronavirus in Portsmouth, as Robbie James interviews a range of local people, including politicians, experts, residents and businesses. On 3rd June, Robbie [… read more ]

‘My Faith Lightens the Load’: How Religion Supports Me and My Community

Covid 19 Community Reporter, Dianna Djokey, interviews Laura Rook, who works for Portsmouth City Council’s Mediation Service, about her personal experiences of the pandemic. In the second part of this interview, Laura explores how her [… read more ]