S&C contributor and Pompey Politics Podcast host Ian Morris shares his experience of the lockdown, as someone with diabetes. It’s Day 49, and these aren’t the droids you’re looking for…

May the 4th be with you.

It’s Jedi Day and for those of you choosing the Star Wars religion, I respect your holiest of days. I confess at this point sci-fi has never really grabbed me. I watched the original Star Wars and found it gripping; the release of the charge to destroy the Death Star was edge of the seat stuff, but after this I didn’t bother. The prequel of the sequel that identifies Ainsley Skywalker as the long lost Caribbean chef that was the first cousin of Darth Vader’s aunty’s cat has left me cold. I think there are 9 films in the franchise now.

This seems to be how most sci-fi leaves me. I live in a house of Whovians, who seem to analyse the children’s series looking for echoes and throwbacks from previous series to ground the current nonsense. My wife and her brother have earnest conversations on the topic, which contain some words I recognise, but the majority may as well be in Serbo-Croat. Tom Baker just wore a long scarf and ate jelly babies, and as an aside, when we went to the Doctor Who Experience in Cardiff, Matt Smith’s hand imprint is unreal. He has hands like shovels!

I can get behind the Hitchhiker’s Guide to the Galaxy and Douglas Adams’ work would be in my top ten books of all time. The Restaurant at the End of the Universe was ok, but the steady decline to the final book had the feeling of: ‘Sorry, I took out a really large mortgage and the bills still need to be paid’, and it left me wishing I had stopped after the first two volumes. 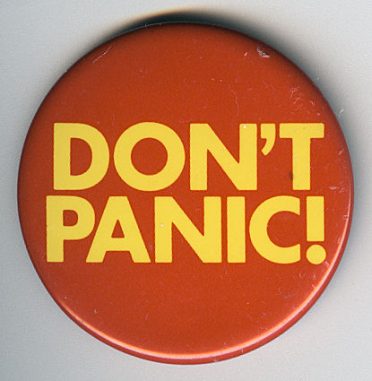 It struck me later in life that the iPad is surely a HitchHikers Guide, as it does what the original text said it could. But back then the concept that it could be updated remotely and would be an ever expanding work hadn’t featured in Mr Adams’ thinking.

So whatever your sci-fi passion, I hope today is good for you.

For me, nothing will ever be as good as Blake’s 7, which was proper cliff hanging stuff. I remember every twist and turn, as the rebels fought against the evil Federation. It was heady TV indeed. I could see then and part of me is glad I couldn’t see it now, as it may not have stood the test of time…

(Ping me with the reference, I reckon it is nearly 40 years old…).

Don’t miss Ian’s diary each day, keep an eye out for new entries here, along with past editions of the Pompey Politics Podcast. How are you managing the lockdown at the moment? Get in touch with us over on Facebook or Twitter and let us know your experiences and any hints and tips you’re finding helpful right now.

Main image by ErikaWittlieb from Pixabay.

S&C is managed and operated by a small team who work on a voluntary and freelance basis to run our website, social media and engage with local residents and communities. Like all independent news providers in the UK, we’ve been hit hard by the pandemic and are currently seeking funding to survive.

If you want to find out more about the challenges facing local independent news: visit the #SaveIndependentNews campaign website, get involved with S&C, donate, and help us spread the word on Facebook and Twitter. And if you want to know more about us, click here.

Your Mental Health and the Power of Pets

Sandy Walker writes for Portsmouth’s Good Mental Health Cooperative, about how our pets benefit our mental health, while Carolyn Barber provides an update on a new project the Coop will be starting, following funding from [… read more ]

Eat Out to Burn Out: Rishi’s Restaurant Risks Remembered

A little over a year ago, the government announced the Eat Out to Help Out scheme to encourage the British public to spend more money in restaurants after the first pandemic lockdown. Unfortunately, the programme [… read more ]

‘S&C contributor and Pompey Politics Podcast host Ian Morris shares his experience of the lockdown, as someone with diabetes. It’s Day 71, and Ian explains his view as to why Dominic Cummings did not break [… read more ]