Local parent, researcher and writer, Maddie Wallace, continues her daily diary describing the experience first, of self-isolating, and now of being in lockdown with her children in Southsea. It’s day 38, promises haven’t been kept, home schooling isn’t going as planned, and the weekly quiz night guests (Via video call) see Maddie’s makeover courtesy of A.

Despite announcing the day before that he’d get up early every day and do his schoolwork, S did not get up at 10am and throw himself into it. He didn’t even get up at 11am. Or midday. Neither did Z. Dragging teenage boys out of bed is no easy feat, even with a bolshy five year old in my arsenal. I made the dog jump on them. I put the cat on them. I played music. I shouted urgently about them having overslept and being late for school.

Nothing. Not even a twitch or a grumble.

I guess one day of S taking a motivated approach to schoolwork is all I’m getting. The afternoon was an extended trauma, with one or other of them requiring cajoling, negotiation, teaching assistance or having a breakdown about how stupid school is.

Why is it that teenagers always resort to school being stupid when they’re stuck? Mind you, there is some value in what they say. Mr Gove and Mr Cummings have ruined English as a subject for a whole generation of teenagers. The changes they made to GCSEs and A Levels are the main reason I left teaching. As the new two year linear courses started, I remember thinking how bloody stupid it all was too and decided I couldn’t be a part of it.

The best learning is not achieved by rote and testing by exams only requires kids to regurgitate a formula that has been drummed into them for years. And lo, now the first cohort of students taking the reformed qualifications are hitting universities and they lack the ability to think for themselves or make reasoned judgements. English A Level applications are down, and my ex colleagues in the English Department, who trained to teach A Level, now spend most of their time teaching GCSE re-takes to the increasing number of students failing the subject. Who knew?

I said I wouldn’t get political, but those changes are still affecting my life, especially as I’m now in the position of home schooling two teenage boys who hate a subject they once loved. At one point, S put the Mos Eisley Cantina song from Star Wars on the laptop and started singing the same two bars on repeat, either to symbolise the chaos in his mind about Shakespeare, or to wind everyone up. It was funny for thirty seconds, but after a couple of minutes, it was wearing thin. Z asked him nicely to stop. S didn’t stop. Z asked again. S ignored him. I heard the change in their voices from the other room and got there just in time to avert punching.

They drained my attention so much all afternoon that when A asked me for a pear, I couldn’t hear her.

The weekly Wednesday quiz was also a celebration of one of our team’s birthdays, so the instructions were to dress up in formal attire, as if we were going out somewhere posh to celebrate. I don’t know about you, but I’ve gained a bit of weight in lockdown. I’m not that bothered by it because let’s face it, there are far more important things to worry about right now. But what it means is that the one or two formal dresses I own were very reluctant to do up. They were being downright rebellious about it.

‘What am I going to wear?’ I wailed to my friend LMJ on a video call.

‘Just wear jeans and get A to do you a makeover,’ she shrugged.

Why didn’t I think of that? 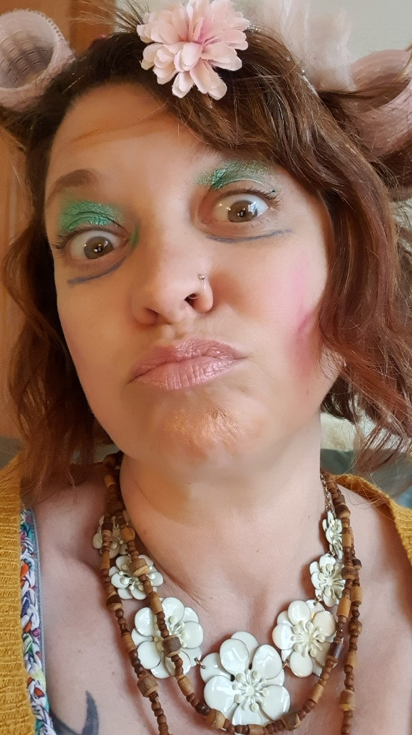 I don’t know if it’s eyeliner or the eyeshadow on my chin I like the most.

My makeover turned out to be lucky, because it won me the quiz for the first time, which is a miracle because I never win things like that. I didn’t even know Amanda Holden was born in Portsmouth. But I can remember a lot of the line-up for Victorious Festival 2015 it seems, and that’s what dragged me from a middling score to a winning one. My memory is so awful I can barely remember my own name, but the birthday boy writing the quiz hit on one of only a few things my memory likes: line-ups. A completely useless skill, until it comes up in a quiz. Unfortunately, there’s no prize for winning, other than kudos.

I’m responsible for preparing the questions for next week. There will be rounds on the things five year olds say to get out of going to bed, the contents of my pencil case, how many times the dog has tried to trip me up today, and the different ways my cat has attempted to injure or kill himself.

Image by janeb19 from Pixabay.

In the Shadow of the Oak

Wendy Metcalfe finds an oasis of peace just off the beaten track. One of the things I decided to do during lockdown was extend the amount of walking I did every day. Before lockdown that would [… read more ]

Back to School in a Pandemic: A Portsmouth University Student’s View of Covid-19

Portsmouth University student Jessica De Lord shares her hopes and concerns about returning to study in the ‘new normal’ of online learning, distanced classrooms and a somewhat restricted social life. It feels like a million [… read more ]

Sindy Prankard tells the poignant tale of her struggle to raise a teenager suffering from mental ill health – and how, despite everything, she is prouder of him than ever. When the first glow of [… read more ]