Local parent, researcher and writer, Maddie Wallace, continues her daily diary describing the experience first, of self-isolating, and now of being in lockdown with her children in Southsea. It’s day 22 and everyone is climbing the walls, some of them quite literally.

I was anticipating this two weeks ago, so I underestimated him, but S has now gone stir crazy.

Cage a 14 year old boy for long enough and it’s going to happen. But cage S for more than a day and he’ll be climbing the walls by teatime. You know those kids who stand on the table at seven months old and clap their pudgy little fingers at you with glee? The ones who are always shouting ‘Muuuuum! Look!’ when you’re walking down the street and you turn around to see them up a lamp post or a tree? The ones who think getting Parkour lessons for Christmas is the greatest thing that ever happened to them, who didn’t sleep through the night until the age of 5 because they’re so full of energy they just have to be awake and who swing upside down in door frames while asking you what’s for dinner.

We decided to hang out in the yard instead of going out for a walk, and S wanted to get the barbecue out. A cursory risk assessment of A in the garden with a glass of water produced worrying results so I sent S to the cellar to find the reusable plastic cups. He found them, and he also unearthed an old hula hoop that once belonged to H. He wound himself into a physical frenzy doing jumps through it and demonstrating pretty impressive hoop spinning skills for a beginner. At one point he was throwing it up in the air and diving through it as it came back down. A saw this and introduced her skipping rope into the mix, and they had a competition to see who could skip the longest. Then he started running at the back of the house and jumping off it, just to see how high he could go.

‘D’you think I could jump out of that?’ he asked, eyeing up the 2nd floor window.

I was up at 8am to take the cat to the vet for his operation. That’s the first time in 3 weeks I’ve been awake before 9am. I didn’t get much sleep either. The fear that I wouldn’t hear the 3 separate alarms I’d set, and just the anxiety of having to set an alarm at all, meant I was waking up every 20 minutes from 4am. Because the kitten had started trying to shag the dog the previous day, there was also a constant kerfuffle happening on my bed as she tried to shake him off. By 6am I’d shut the little twat out.

I took the dog in the car with me because aside from his new frisky attacks, they have an incredibly close bond and I knew her presence would calm him. It worked; the usual wailing and crying about being confined in a box was non–existent. Plus, it makes for really cute photos. 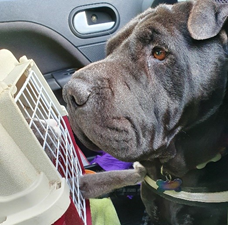 I’ve been to the Common plenty of times just after 9am because I sometimes walk the dog after dropping A off at school. It’s usually full of other dog walkers, but not anymore. Southsea Common at 9am is now a bit like a school sports day, but with disparate groups of siblings being exercised with military authority by mothers who clearly have more luck getting teenagers out of bed than I do. That’s way above my pay grade. If I tried to get S and Z out for a run at 9am I’d be furloughed.

That said, I did actually do some exercise. One of my best friends from school is a physiotherapist who also teaches Pilates. She’s been treating my dodgy double broken ankle, gammy knee and painful lower back since last September, and after decades of physios, chiropractors, surgeries and the after-effects of cancer treatments, she’s got me off codeine. That’s how bloody good she is. My back still twinges, but that’s not something that can be cured without 5cm being removed from my right femur. With the treatment and exercises she’s given me, it’s manageable without pain relief now.

However, 3 solid weeks of sitting about being lazy and only going for one walk a day was starting to make my back glitch more than usual. Plus, seeing all those people exercising with serious passion on the Common shamed me into doing one of my friend’s online Pilates sessions. God it felt good. There were moments where I moaned in actual relief just to be stretching my body again. The endorphins lifted my mood too. Enough lazing about now, I’m doing Pilates or yoga every day from here on out. I probably won’t make her 9am live class, but I will be properly exercising now.

I’m not a royalist, I don’t care much about them either way. Well, apart from Prince Andrew obviously still has some questions to answer about Jeffrey Epstein. But the Queen invoking WWII rhetoric in her speech on Sunday to get through to the elderly behaving badly was a stroke of genius. I’ve seen lots of people on social media despairing of their parents or grandparents still ‘popping to the shops’. Well done the Queen, or her speech writers, or whoever thought it would be a good idea to drop Vera Lynn into the mix. It seems to have done the trick for many of the over 70s who were still being rebellious and using the excuse that they’ve lived through worse than a virus.

The cat came flying through the loss of his manhood without a hitch. The nurse told me – from a safe distance – that they couldn’t believe how big his testicles were for a 4 month old kitten. Unfortunately, his hormones, and therefore his urges, won’t decrease for another couple of weeks, but it’s much easier to cope with now we know they will stop and we won’t have to spend months trying to dodge his overzealous affection while locked in with him. The dog will be so grateful.

Image by Karolina Grabowska from Pixabay.

Citizens Advice in the Community: ‘I Call it the Power of Portsmouth’

How has the pandemic affected the local voluntary sector? In a three part series, Covid-19 Community Reporter Paris Ali-Pilling interviews Citizens Advice Portsmouth’s Chief Officer, Sandy O’Neill to find out how the pandemic and lockdown has affected [… read more ]

Does Size Matter? The Case of the Luna Park Dinosaur

Having never seen the first installation of the Luna Park dinosaur on Southsea Common, Paris Ali-Pilling set out to see what all the fuss was about, and whether local complaints on social media about the [… read more ]

S&C contributor and Pompey Politics Podcast host Ian Morris shares his experience of the lockdown, as someone with diabetes. It’s Day 60 and Ian muses on the impossibility of predicting what audiences might like, or [… read more ]