It has been over 100 years since the founding of the Fire Brigades Union (FBU) on October 1st 1918. Today it represents around 34,000 women and men in the fire and rescue service. One of the many things that the FBU does is to influence policy and legislation in regards to ‘improved health and safety legislation, union and employment rights‘.

The Firefighters’ Story: 100 years of the Fire Brigades Union explores ten decades of work to improve fire safety in the UK. Using archival footage showing how men and women in the fire service have made an impact on fire safety,  screenings of the documentary are taking place all over the UK. Each one aims to be held on a day that has special meaning to firefighters in each location, ‘such as the anniversary of a large incident or the loss of a colleague in the line of duty‘.

In Portsmouth, the screening will be held in the Historic Dockyard’s Auditorium and commemorates 21 firefighters who lost their lives defending the Dockyard in the Second World War. The event will also feature guest speakers and organisers hope to unveil a red plaque to the 21 firefighters, all but one of whom lost their lives.

Hampshire FBU recently shared the names of the firefighters from Portsmouth and Gosport, posting: ‘It is these brave Firefighters we wish to remember on the 27th of September 2019’, the union posted on Facebook:

The documentary was made by In Focus Productions and uses archive footage of firefighters, including during the Blitz, when Churchill described fire fighters as ‘Heroes with Dirty Faces’. The film also highlights the 88,000 women ‘who worked on the frontline as well as in control rooms’. Early firefighters worked in appalling conditions under a ‘continuous duty’ system, working with no pensions and near non-existent holiday and sick pay, living in fire stations in cramped conditions with their families.

In a blog post on the FBU website, Tam McFarlane – FBU executive council member for the South West – reviews the documentary.

‘I have attended three screenings of the film and can attest to the powerful, overwhelmingly positive impact that it has had on those who watched it. In Bristol, where the film was first shown, an audience of FBU members from the past and present, with their families, joined politicians and other trade unionists to watch the film before taking part in a question and answer session with general secretary Matt Wrack. This format, which has created interesting discussion and audience participation, has been repeated in subsequent screenings in London and Glasgow’.

Matt Wrack, FBU general secretary, said, ‘As we reach the end of our first hundred years as a trade union and start our second, we wanted to mark it in a memorable way. This film will be something for both current and future generations to learn from, not just about the value of firefighters to communities over the last century, but the significant contribution FBU members have made to public safety, and of course the safety of its members.

‘We are extremely proud to have made such an impact on safety through our long history of campaigning and lobbying. And now, 100 years after we began, we have the Grenfell Tower atrocity to address. We will do our utmost to ensure that policies around social housing, building regulations and fire safety will be extensively improved so that people living in tower blocks are safe’. 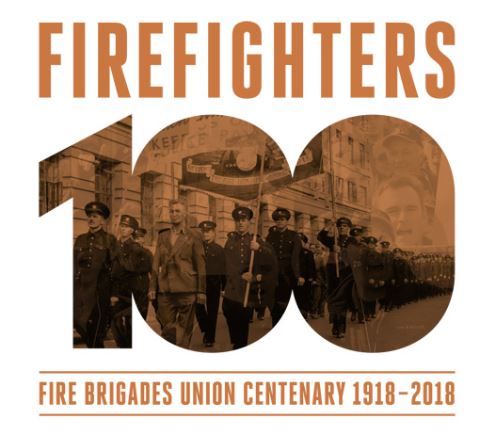 Fire fatalities have dropped by 25% since the Grenfell tower incident in which 72 people died. The FBU state that this is ‘largely because of the 72 lives lost at Grenfell Tower the previous year’.

Matt Wrack, FBU general secretary, said: ‘These latest figures confirm what firefighters are feeling on the ground – they are under increasing pressure, responding to more incidents with scarcer resources, as budgets and firefighter numbers continue to be cut. Shamefully, firefighters are being thanked for their efforts this year with yet another real-terms pay cut.

‘We are deeply concerned that, after massive cuts to fire safety officers and years of fire safety deregulation, there has been a significant increase in fires in England. We have warned of the impact of climate change on fire for the last decade, but the government has failed to listen. Long, dry summers are making fires more likely, while firefighters are responding to a huge number of floods across the country.

‘The Westminster government has been utterly complacent about fire safety for years and it is clearly taking its toll. We urgently need to invest in fire and rescue services and to radically boost firefighter recruitment – people’s lives, homes, businesses, and communities are at stake.’

In 2017, S&C worked with a local firefighter and representative of the Fire Brigade Union to report on the impact of cuts to the fire and rescue service in Hampshire, following an announcement of £4.1 million of cuts to the service in February 2016.

‘It is appalling that the government is trying to sneak through cuts to fire and rescue services with virtually no scrutiny. They are ramping up their austerity measures despite claiming that austerity is over,’ said Matt Wrack.

‘Nearly two years on from the Grenfell Tower fire, this Tory government is still showing a complete disregard for public safety. A properly funded fire and rescue service is essential to protect our communities from fire and a wide range of other threats. These cuts are a danger to firefighters and a danger to the public.’

The urgent need for public understanding and support for the impact of government cuts on the fire and rescue service makes this event perfect viewing for Portsmouth residents keen to show solidarity for local firefighters, and to find out more about the long history of the Fire Brigades Union.

The Firefighters Story will screen at Action Stations, Historic Dockyard from 7pm-10pm on Friday 27th September.

Check out the trailer below – extra points if you spot Cosham Fire Station in there!

Then get the date in your diary and book your tickets at Eventbrite.

Follow the Southsea and Cosham fire stations on Twitter for updates on calls attended and information on fire safety.

Covid-19 Raises Risk for Victims, But Help is Still Here

Shonagh Dillon, CEO of Portsmouth-based charity Aurora New Dawn, talks to Sarah Cheverton about how the virus is increasing danger for victims, and how already under-funded organisations like Aurora are changing the way they work [… read more ]

Why Has Rough Sleeping in Portsmouth got Worse?

The Society of St James (SSJ) is a Hampshire-based homelessness charity that provides accommodation and support to over 2500 people each year. Here the charity’s team explore why homelessness in Portsmouth and the surrounding area [… read more ]

Portsmouth’s DVMISSION is in its twelth year and is the longest running 48-hour film challenge in the UK. But this is no ordinary film festival… DVMISSION is an annual, not for profit and independent film [… read more ]