Continuing our new series of stories from our Young People’s Voices project – funded by Victorious Festival and supported by the University of Portsmouth – Tom Hooker & Helena Tuck, students at Havant and South Downs College, explore the suffering caused by mental health problems, and the help available to anyone who is struggling.

Mental health is something most people have either directly experienced or know someone who has – yet it isn’t talked about often enough our society. It is still seen as a taboo subject, where some people who suffer are given medication such as anti-depressants or prescribed painkillers to deal with their mental health. For some, medication alone can be isolating professional support.

One of the most well-known aspects of mental health is self-harm. This is when people inflict damage to their own body in order to hurt themselves, sometimes with long term effects. According to the Royal College of Psychiatrists, self-harming behaviours include cutting, drug-use and hitting yourself, but wider behaviours also fall into the category, including starving yourself, having unsafe sex, or excessively drinking alcohol. It can be triggered by being depressed, experiencing overwhelming emotions or feelings of self-hatred. Before self-harming, people will have suffered from emotional pain, abuse or stress in their life, including issues like physical or sexual abuse, depression, difficulties with relationships or work problems and unemployment.

The Royal College of Psychiatrists reports that around 1 in 10 young people self harm. Research undertaken by the Children’s Society examining ‘the state of children’s well being’ found that 1 in 4 teenage girls will self-harm. Self-harm is statistically more common in young women than men, with the research estimating that 76,000 14 year old girls and 33,000 14 year old boys will self-harm in a 12 month period.

The reasons for self-harm vary. Almost half of the 14 year olds who said they had self-harmed and were surveyed as part of the research said ‘they had been attracted to people of the same gender or both genders’ (46%). Another factor linked to self-harm is how young people feel about their looks, particularly feeling they are not good enough.

The help on offer for young people to try to tackle these problems is no way near sufficient. Local authority children’s services face a shortfall of £2 billion by 2020 and will face a £3 billion funding gap by 2025.

So how are the schools helping with the rapidly increasing situation? From recent experience of past students at secondary school, there isn’t anywhere near enough counselling or help for problems with mental health.

‘Apart from learning support and Special Educational Needs (SEN) advisors, there wasn’t any counselling advertised or talked about, you had to ask for it,’ said a former pupil at Horndean Technology College.

It is shocking for the education system not to take action on supporting mental health, especially when more articles are being published on the subject frequently. At Cowplain School, my friends and I had access to a school counsellor, where we could talk about anything we were suffering. But many students explained to me that the counselling sessions did not help them because they felt uncomfortable talking to an adult they didn’t know about their problems. Sometimes it made my friends even more stressed because they did not want to be taken out of their lessons to go to their counselling appointments.

These kind of stories relate to many teenagers across the UK not just Portsmouth and we need to take immediate action. It is apparent that many schools suffer from similar problems.

One way to help teens is to talk more often about issues like appearance, gender stereotypes and sexuality. These should be talked in the sex education curriculum and in assemblies. Doing so will aid young people in feeling better about themselves and show that it’s okay to be different.

Another possible way to help is through teens helping teens, as they are more likely to be able to relate better to the person’s problem. However, teens don’t have the training that professionals have,so they may not know how to handle certain situations in the appropriate manner. A way to address this issue is to have lessons teaching students how to support each other with their problems and what actions they could take to do so. This would be a huge improvement in the long term as these skills could also be used in adult life because mental health can affect anyone at any age.

How To Get Help

People don’t often feel they can talk about self-harming, as they see it as a coping mechanism rather than an actual problem. There are, however, many ways of getting help if you do feel able to, including talking with a professional or non-professional (it doesn’t have to be someone you know, it can be anonymous), self care groups where people with similar problems support and advise each other, family meetings with a therapist, and group therapy where a professional leads the group.

If you are considering harming yourself, there are many ways to tackle this until the urge decreases. Try to think positively, talk to someone if you feel able to, occupy your time with a hobby, or write a letter to yourself or a diary. One of the best practical methods is to do things that satisfy your urge that aren’t that bad for you, such as taking a cold shower or drawing red lines on your body.

However, if you can’t stop self harming there are still things you can do to help yourself when you want to self-harm, as the box below from the Royal College of Psychiatrists shows. 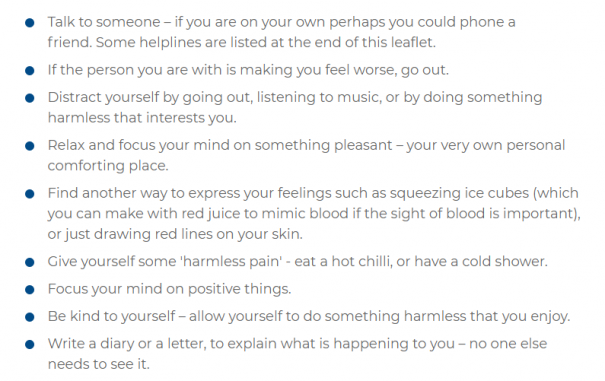 If you know someone who self harms there are some pointers you should use in order to be the best help for them you can. Always remember to: listen to them without judgement, check up on them to see how they are doing, talk to them if they are considering self harm, and be there for them when they are getting help and trying to.

There are also a wide range of organisations, helplines and resources that can help:

But the most important thing to take away is this: there is help available, whether it is professional or someone you have a personal connection with. You are loved more than you know, and you worth is bigger than you think. Time is the greatest healer. Emotional pain is not something that should be hidden away and never spoken about.

The Young People’s Voices project aims to provide young people with a platform to share their opinions, report on topics that affect them and advance standards of literacy. We worked with students from St Edmunds School and Havant and South Downs College to investigate and write their own stories, in a variety of styles and mediums – from creative memoir and opinion pieces to their own investigations. All their work will be published on S&C throughout July, and all participants have the chance to enter their work into a competition to read their story on the Spoken Word Stage at the 2019 Victorious Festival. You will find all the Young People’s Voices stories here as we publish them.

Are We a Nation Divided By Austerity? Or Are We Now Two Parallel Worlds?

After last year’s referendum and the recent election result, there has been plenty of speculation about a ‘nation divided’. Local resident and S&C contributor Rosy Bremer fears we may be far beyond division, and already in [… read more ]

Hidden Places Around Portsmouth: End of the Pier Show

Local resident and photographer John Callaway gives us a glimpse into Portsmouth’s hidden places with his stunning photography. This week, John finds some political metaphors at the end of the pier… The Scene: A coastal town somewhere in [… read more ]

Young People’s Voices: Saving the Planet Matters to Me

Continuing our new series of stories from our Young People’s Voices project – funded by Victorious Festival and supported by the University of Portsmouth – J. Cosgrove, a pupil at St Edmund’s School, explores how [… read more ]