It’s 1642: George Goring is the Governor of Portsmouth. But can he govern his own impulses? Writer Vin Adams describes why and how he came to wrote a historical play on Portsmouth – in authentic dialogue from the time – called Besieged.

A sudden urge to give Portsmouth its very own seventeenth century drama is an odd thing to have in the twenty-first century, but that is what I’ve tried to do in writing Besieged. The play is about events on Portsea Island – or Portsey Islande, to use the historical and more characterful spelling –  at the start of the Civil War, and it took me longer to write than anything I’ve ever done (and I used to work in Quality).

I became hooked by the character of Colonel George Goring, the Governor of Portsmouth, who was exactly the kind of chap to tantalise a writer: a duplicitous, double-dealing narcissist who ended up in charge of a strategically important town and all the folk who lived there. Irresponsible people in charge? Thank heavens history doesn’t repeat itself.

In the late 1990s, my Theatre in Education colleagues and I gave this story the family-fun treatment (there was a puppet monkey who saved the day by replacing the gunpowder with bananas), but it stayed with me as something worthy of a fully-fledged, five-act Carolinian caper. But how to write it?

Recently, the trend has been to diligently research the costumes, props and settings of historical dramas and then give characters the sort of dialogue you might hear in any modern boozer. The Favourite is a good example (and a very enjoyable film) but why, I wondered, can’t the words have a nice costume too? And then Hilary Mantel laid down the gauntlet in a Reith Lecture: ‘Pastiche,’ she said, ‘is not creative.’ She may be right, I thought, but I’m going to try and bludgeon it until it is. My characters weren’t just going to look seventeenth century, they were going to sound seventeenth century: iambic pentameter, vocabulary from the period, eccentric word order, the lot. But accessible, I hope. Not like those jokes in Shakespeare that puzzle everyone.

And so, one fateful morning, I opened a new document and began to type. And then stopped after the second word. I looked something up. Then I typed a few more words and stopped again. At which point, to cut a tediously long but decidedly un-shaggy story to shreds, I realised what I’d taken on: in deciding to use only vocabulary that was available in the period, I was going to have to check practically every third word for historical accuracy and usage. In short, I was going to write this play at a pace that would make a glacier look nippy.

Roughly eighteen months later, I came round in the hospital to be told that I’d finished the thing. (This is a lie. In the moments after I typed the last word I think I stared at the wall for a bit, but writers like to think that finishing something is a rather more dramatic, not to say euphoric, moment than it actually is.) The OED Historical Thesaurus, David and Ben Crystal’s Shakespeare’s Words and the wonderful Internet Shakespeare Editions have been constantly open on my computer to help me look things up and find contemporary usage. I have included verbatim passages from the pamphlets of the period – some of which are locked in the vaults of Portsmouth Library – and even from scans of two letters by Goring which the lovely people at the Isle of White County Record Office sent to me.

It is, of course, pastiche. I am not a linguist and my understanding of modern grammar (let alone the toxic melting-pot of seventeenth century grammar) is modest. Having directed and acted in plays of the period, I have probably been led more by my ear than any intellectual certainty. But there it is. It’s a full-length drama, and the wonderful Southsea Shakespeare Actors are producing it for me with twenty-four actors under the direction of the inestimable Nick Downes and Steve Blackham.

‘Reading is easy; writing can put a man at much peril,’ says a character in the play. If he’d said it before I’d written it, I might have listened carefully and not written it. But I have, and in a few weeks’ time I shall find out what people make of it all: an audience of Portsmouth people watching Portsmouth actors tell the story of our forebears. It’s a lively tale that travels to the Queen’s apartments and Westminster before settling in to what a pamphlet of the time called ‘An UPRORE at PORTSMOUTH’. I like that ‘uprore’: it roars much louder than an uproar.

I hope I’ve proved that pastiche can be fresh, engaging and evocative, but that’s for the audience to tell. I wonder what that seventeenth century lot would have made of my play? Exit pursued by a forebear…

Besieged – Being a New Play about the Remarkable Role of Portsmouth in Kindling the English Civil War. 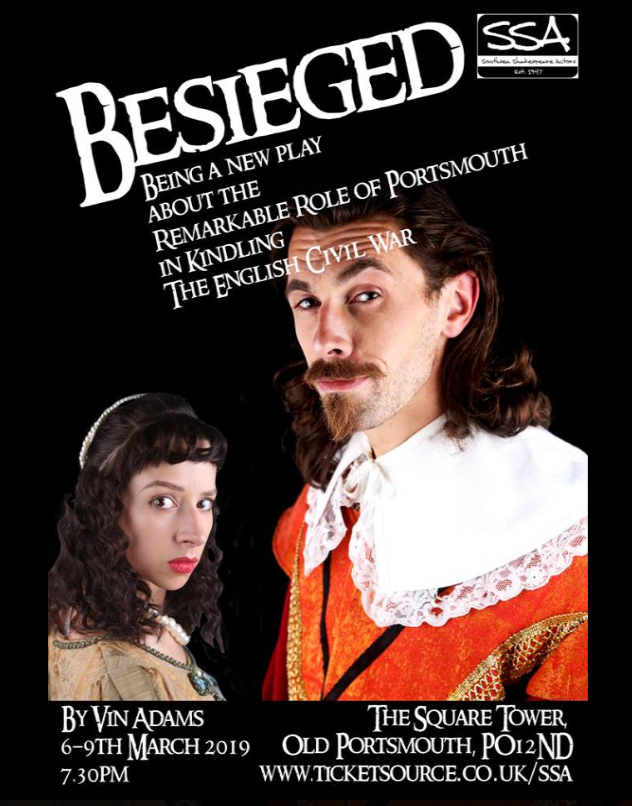 S&C contributing editor John Oke Bartlett has been collecting anecdotes from Portsmouth pubs for years. This one has an unexpectedly explosive denouement. There is nothing better than whiling away the time in an old pub [… read more ]

Novelist, academic and S&C Contributing Editor, Alison Habens discusses her creative intervention into the life and times of a legendary Portsmouth author. I was walking along Kings Road, on the last day of summer or [… read more ]