Writer and Daily Mail journalist Peter Hitchens has struck back today at Portsmouth University’s Students’ Union following the recent controversy over the decision to delay a planned event at which he was to speak. Sarah Cheverton reports.

Following an article from the University of Portsmouth’s Students’ Union (UPSU) claiming that Mr Hitchens ‘refuses to reschedule’ his event, the journalist responded to Star & Crescent on social media, stating that UPSU’s claims were ‘unbelievable twaddle’ (see image below).

Mr Hitchens was due to speak on 12th February as part of the Student Union’s (UPSU) Big Talk series, however UPSU made the decision to postpone the event, in response to ‘multiple views from students, through a variety of channels, expressing concerns over [Mr Hitchens’] published views’.

In a statement released on 6th February, UPSU said:

Speaking on behalf of the Students’ Union, Violet Karapaseva, Union President, has said that “we are committed to ensuring freedom of speech on the University of Portsmouth campus, however recognise that the timing of the scheduled event and the speaker’s previously published views do not align with our current celebration of the LGBT+ community.”

Mr Hitchens responded the same day to the news that the event was being postponed on Twitter with the following statement:

Thought Police alert: Portsmouth University Students’ Union have ‘postponed’  a meeting I was due [to] address next Tuesday, because my opinions are unacceptable. Poor old Pompey has suffered so much in defence of English freedom, and this is how it all ends.

Piers Morgan weighed in on the decision to try to rearrange the event, describing UPSU on Twitter as ‘pathetic, spineless little snowflakes.’

Writer and journalist Johann Hari said of the cancellation, ‘We have a right to marry. Peter has a right to speak. We don’t advance our rights by trying to take away his.’ 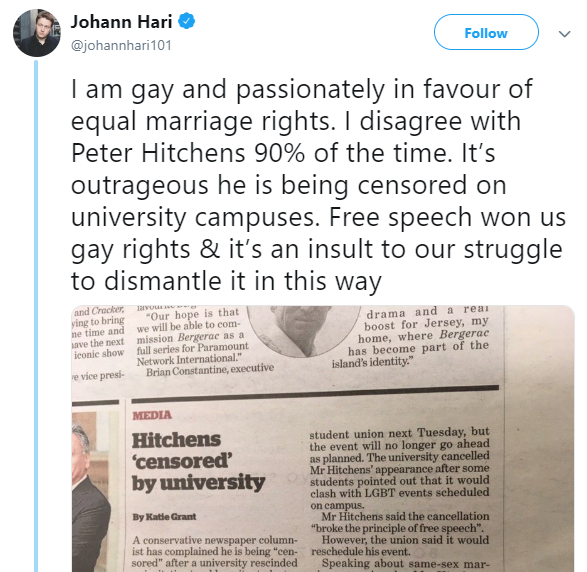 Two petitions – one in favour of Mr Hitchens’ appearance and one against – have been created by local students through UPSU’s Have Your Say platform.

Although UPSU insisted the event was only being postponed, the decision has generated a controversy covered in the national press, including in The Independent and in Mr Hitchens’ blog on MailOnline, where he lays out his decision not to rearrange the event in more detail, describing claims the event is only being delayed as ‘absurd’ and a ‘pretence’. He explains:

But the reason why the meeting will not be held is a human decision. The decision is based on the belief that my opinions are so bad that I should not be allowed to speak.  That belief is based on a rejection of the very idea of freedom of speech.  And the ultimate grounds for the decision are grounds of censorship and thought control.

However, UPSU claim ‘Any decision not to come to speak to University of Portsmouth students is Mr Hitchens’ and Mr Hitchens’ alone.’ Violet Karapaseva, Students’ Union President, said:

It’s disappointing that Mr Hitchens has not rescheduled his speech for those University of Portsmouth students who wish to hear his opinions and encourage debate.

This afternoon Mr Hitchens hit back at UPSU on Twitter describing their statement as ‘creepy rubbish’ (see images below). 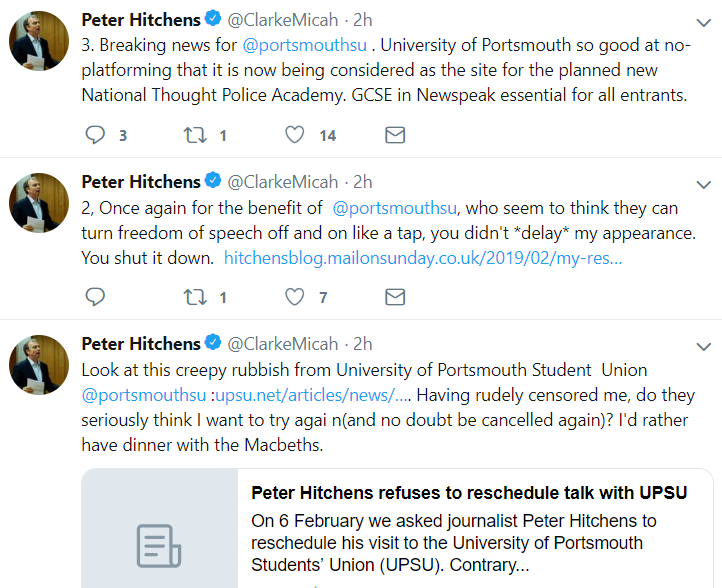 University Vice Chancellor, Professor Graham Galbraith, said the university was ‘delighted that the Students’ Union has invited Peter Hitchens to talk to students’ and describes the postponement of the event as ‘unfortunate’.

As the postponement has attracted a lot of attention Peter Hitchens can be sure that the rescheduled event will draw a large and interested crowd. We would welcome him to the University and hope he will come. It would be disappointing if students were denied the chance to hear Mr Hitchens’ views.

Given Mr Hitchens’ statements today, it seems likely that students and the University will indeed be disappointed. However, Mr Hitchens has not ruled out returning to the city altogether, telling Twitter on 10th February, ‘I hope some way will be found of arranging a future meeting in Portsmouth, but absolutely not on any premises controlled by the UPSU.’

Endometriosis: Living With a Hidden Illness as a Portsmouth Student

Creative writing student at the University of Portsmouth, Lucy Morris, speaks out about a hidden condition and how it affects her and a million other women in the UK.  Endometriosis is a debilitating illness found [… read more ]

Everything Writers Should Know About Publishing

In association with Star & Crescent and the University of Portsmouth’s Faculty of Creative and Cultural Industries, Portsmouth Bookfest 2018 will be holding a fascinating and informative Publishing Weekend on 17-18th February for local writers [… read more ]

From Snooty Wine Mums to Foul Odours: A Bartender Rambles from Surrey to Portsmouth

From March until the last day of August 2020, Portsmouth-based writer Morgan Turner was one of the many volunteers who were rounded up to help deliver groceries, collect medicines, and return parcels for the vulnerable, [… read more ]