Armed Forces veterans from in and around Portsmouth area will share their experiences of life in the Armed Forces – and after – at an event hosted by the University of Portsmouth on Friday 9 November. Sarah Cheverton reports.

On Friday 9th November, local veterans will be sharing their experiences at the University of Portsmouth: challenging the audience to revisit their assumptions about life in the Armed Forces and what it means to serve.

Taking place head of the weekend’s Remembrance Sunday commemorations, the panel of veterans will explore issues including what it means to ‘serve your country’, what challenges people in the services face, and what happens when they leave.

The performance is part of a long term project by the University of Portsmouth’s Dr Erika Hughes, Senior Lecturer in Drama and Performance, called The Veterans Project, a series of oral history storytelling events and community-building performances with military veterans in the United States and the United Kingdom. The project has been running since 2013.

Part of a previous performance filmed with US veterans can be seen below.

Dr Hughes said the project ‘seeks to create a space for veterans to share their stories in a performance setting with their community.’

The Veterans Project highlights that there is no ‘one size fits all’ experience of military life, and the veterans telling their stories ‘represent an incredible range of experiences and political viewpoints’. 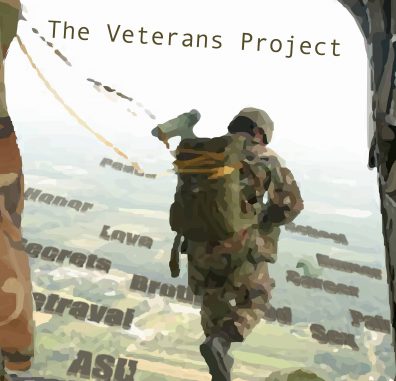 Peter is the Theme Director for Security and Risk Research and Innovation, and a Reader in Politics and Ethics at the University of Portsmouth, and a former chaplain in the RAF. He specialises in the ethics and ethos of drone warfare, the politics and ethics of war and military intervention, and the politics and ethics of identity. Peter is also the author of Blair’s Just War: Iraq and the Illusion of Morality, and Truth Wars: The Politics of Climate Change, among other titles

Ash joined the British Army in 1986 at 16 years of age and entered the Royal Army Medical Corps. He qualified as a Combat Medical Technician and went on to complete training as an Operating Theatre Technician. During his 14 years in the British Army he was posted in various military hospitals in England, Germany, Cyprus, Gibraltor, and the Falkland Islands. He undertook tours in Bosnia as part of the United Nations Protection Force and Macedonia/Kosovo with the 5th Airborne Brigade as part of the British contingent to the NATO force.

This event is free and takes place at the Studio 1 Theatre, White Swan Building (behind the Brewhouse & Kitchen, or old Mucky Duck pub), at 7pm.

Tickets can be reserved here. To find out more about The Veterans Project, follow them on Facebook.

Here’s our second monthly round-up of local events and protests for Pompey campaigners and activists. If you have an event, protest or campaign meeting you want to share, let us know on Facebook or Twitter. [… read more ]

Portsmouth and the University: Are We Divided by Town and Gown?

University of Portsmouth student Maria Sewell asks whether the growing population of students is having a positive or negative effect on the city’s image.  The Royal Navy has long been at the heart of Portsmouth’s growth and [… read more ]