Local author and organiser of Portsmouth Plugged In, Charlotte Comley, gives helpful advice to writers and creatives alike as she tackles the difficult subject of finding yourself feeling jealous about the success of others.

So, it’s a temperamental July, you’re melting in the morning heat, thinking about your to-do list, and a friend turns up and tells you she’s just signed a three book deal.

How do you feel?

Pleased? A massive wave of jealousy? A brief wave of self-doubt?

My first piece of advice is: chocolate.

Actually, that’s my first piece of advice for most problems. After all, it’s not just good for a Dementors’ attack.

This scenerio is not an uncommon phenomenon in my life. In the writing community, I have often been the bridesmaid, but never the bride. I am fond of an American Comedy called The Middle; my favourite character is Sue Heck. She tries and fails, but that doesn’t stop her putting all her effort into every project. Similarly, if you are a person who gives your best, you’re well placed to understand that jealousy is fleeting. I’ve never regretted putting all my effort into a project, and if it doesn’t turn out the way I wanted, I know I gave it a shot. Strangely, I have often found that unexpected opportunities are the reward.

And when confronted with someone else’s success at nine in the morning, when you know you’re doing your best on your projects, it is also possible to discover that jealousy is a GOOD thing.

I remember being told jealousy becomes problematic when we act on it, or wallow in it.

So at 10am, I admitted my feelings, ate some chocolate, had a cup of tea and then pulled out my latest to do list with a critical eye. By 12:30 all negative feelings had gone and like Baldrick ‘I had a plan.’ In fact, I had lots of plans. One of which was to blog more regularly.

This article was originally a blog post and look what happened – Star & Crescent approached me and asked if they could publish it. How’s that for an unexpected reward?

Imagine if J.K. Rowling had said to herself, “J.R.R. Tolkien already wrote a whole bunch of wizard-y books, years ago, and he’s a much better writer than me. He already has masses of adoring fans. I have none. Jill Murphy set her school for witches in a boarding school; I’d better not do the same. 12 publishers have rejected my manuscript for Harry Potter. I’ll just quit now.”

We need to take the fear and negativity out of the word JEALOUSY and focus on the power it has to motivate, inspire and act as a call to action.  There is no faster or clearer tool for showing you exactly what you want. When you feel jealous of someone t 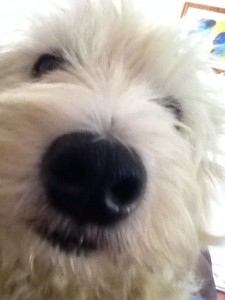 hat is a clear indication that something is missing in your life that has yet to be fulfilled.

Take a moment to look at your achievements; you tend to forget your moments of awesomeness when feeling jealous. Remembering my successes means I’m already feeling less like a failure.

Next look at any limitations you have: is it a lack of cash, time or energy? Is there any way round these problems? Now I’m identifying barriers that are holding me back and working on solutions to them.

Underneath that jealous feeling, what is it that you think you’re missing? I write it down and then work on an action plan. Now I’m feeling motivated.

So be like a dog, live in the moment!

The people we feel envious of are people who are getting things done and working hard. I dislike the attitude that they have been given something I haven’t. If my mate turned up and told me that someone had given her an enormous wad of cash for doing nothing, that would be a different story. But all writers know the work that goes into writing a novel.

Instead of associating success with things we think others have been given that we haven’t, put that energy into thinking about the level of work, drive and talent that success really takes. Identify your milestones and get started!

Just think how jealous everyone will be when you succeed…

Image of dog by Charlotte Comley.

By Chris Campbell. Robert was in his early sixties and had lived alone since his wife had died almost two years ago. He had a daughter who lived in Eastbourne, down on the south coast [… read more ]

Charlotte Comley reports on her recent experiences as the Project Manager for Portsmouth Plugged In, a collaboration between writers and filmmakers. The theme of this year’s Portsmouth Festivities was Electricity, and for ten days the [… read more ]

Maggie Sawkins, who leads local poetry and creative group Tongues & Grooves has unleashed a local #writingchallenge and they kindly let us publish the responses. This week’s challenge is to write a poem of 14 lines in which [… read more ]